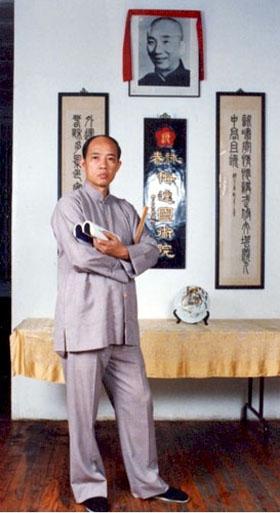 Trained '57-62 to become a Sifu under Yip Man, he then opened a school.  Carved the Kuen Kuit into blocks and was a artist, author, and calligrapher. Moy Yat has one of the largest Wing Ch END_OF_DOCUMENT_TOKEN_TO_BE_REPLACED
primary teacher/lineage
Teacher Name
Rank Sifu Moy Obtained
Still Affiliated?
Ip Man 葉問 (Yip Gai-Man)
3. Master of the System (As taught by teacher (Full Sifu))
No


Trained '57-62 to become a Sifu under Yip Man, he then opened a school.  Carved the Kuen Kuit into blocks and was a artist, author, and calligrapher. Moy Yat has one of the largest Wing Chun organizations in the USA.

Moy Yat (Moy Yit Kai) was born in a Chinese town called Toi Shan in the province of Canton. In 1953 his family moved to Hong Kong. He began his study of Ving Tsun Kung Fu under Yip Man in 1957 and was a frequent companion as well as a dedicated student.

At the age of twenty-four, Moy Yat became the youngest Ving Tsun sifu.  In 1967 he carved the Kuen Kuit into stone to preserve the knowledge and history of Ving Tsun.

After Yip Man's death, Moy Yat moved to New York City and began teaching there until he retired from teaching at age 60.

He was very well known and respected as a Master of Ving Tsun and also as a highly skilled calligrapher, painter, stone seal maker, and master of massage. He was a pioneer in the field of ear acupuncture, discovering and mapping new points on the back of the ear which are now being used by acupuncture doctors throughout the world. His kung fu students number in the thousands, and many of the well-known Ving Tsun sifus were once his students.

Master Moy Yat passed away on Tuesday, January 23, 2001. His funeral was held at Cheung Sang Funeral Home in New York City on Saturday, February 3, and he was lain to rest the next day at Kensico Cemetery in Valhalla, New York.

After Moy Yat's death, William Cheung, Grandmaster of his own "Traditional Wing Chun Kung Fu" organization said: “The death of Moy Yat is a great loss not only to the martial art of Ving Tsun, but also to the world. He was a very learned man, a good painter, poet, artist and a gentleman. This is a great loss to Chinese culture"

Moy Yat was the author of six books:

There are also approx 40 poor-quality VHS video tapes collected by the Ving Tsun Museum of Moy Yat's seminars hosted there.

Moy Yat was first introduced to Yip Man in 1957, and became one of his closest students. He now has one of the first and largest Wing Chun organizations in the USA. For 15 years, Moy Yat kept a close relationship with Yip Man, living the "Kung Fu Life". It was at this time that he learned from Yip Man the principles and deeper aspects of Ving Tsun. Never far from Yip Man's side, Moy Yat eventually developed into one of his top students.

Moy Yat came to the United States in 1973, where he began teaching Kung Fu in New York City. Moy Yat followed his Sifu's example and used the same method to teach his own students. He instilled upon his students the importance of the "Kung Fu Life", the use of the Ving Tsun principles in everyday life. He always said that Ving Tsun Kung Fu can best be learned outside the classroom. This is how Ving Tsun, as taught by Yip Man, is learned. To his last days, Master Moy Yat lived his life very much in this way, spending his time living and teaching Ving Tsun through "Kung Fu Life".

Moy Yat is well respected, both as a Kung Fu teacher and as an accomplished artist. His paintings, calligraphy and stone carvings can be seen throughout his Chinatown school, as well as in art shows which were held regularly in the city. He also carved some of the Wing Chun Kuen Kuit into stone.

The Moy Yat Kung Fu Family is quite extensive, with students throughout the world spreading the art of Ving Tsun. His Disciples teach Ving Tsun in their own schools throughout the United States and around the world, including schools in Canada, Brazil, and Mexico.