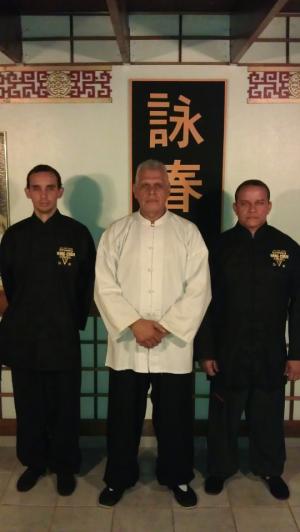 Sifu Chow has practiced Wing Chun for over 40 years. At the same time he has taught Wing Chun and has never stopped to improve the art of Wing Chun. He thanks those who shared their wisdoms with him (see photos). He also wants to thank his students who made sharing so much rewarding. Those students are now sharing their knowledge with others as well. They are Jerry Gardner in Salt Lake City, Wilfred Lopez in Long Island, Jose Colon in Puerto Rico, Eleanor DiPalmer MD of NYU, Julio Ferrer in Seattle, Gary Harris in Mt. Verna, Jake Spain in Arizona, Alan Bowman of NYU, Anthony Dematteo in Connecticut, Jetsun Feliciano in Orlando, Florida, Francisco D'Urbano in Brazil, Uwe Regenold in Germany, Jose Wong and Hector Becerril in Mexico City etc.

Due to changes and new ideas integrated into the system by Sifu Chow, the system is now called Integrative Wing Chun. Sifu Jose Colón no longer appears in Chow's new family tree; which is for instructors who are certified with these new changes.

Progressive Wing Chun remains under the old family tree as it appeared for years in Sifu Chow’s previous web page.  “For history can never be changed”. Always teaching in a comprehensive and competitive way the Wing Chun system as it was handed down--To train the student in a progressive way--familiarizing him with the method, principles, and theories involved is my priority.