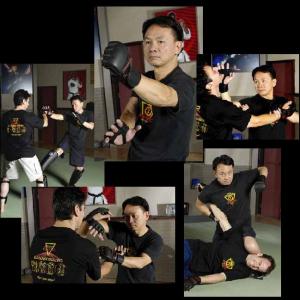 
Sifu Cheung Kwok Chow was born in Hong Kong on 1951. At age of fifteen he studied body building under Mr. Koo Fone who was a Kung Fu star under Run Run Shaw. A year later, Sifu Chow began studying Chinese Karate under Master Carter Wong, who was best known for his role as Thunder in the Kung Fu movie "Big Trouble in Little China (1986)". A ray of styles has touched Sifu Chow's curiosity but he continued looking for a style best suited for him. He had studied the Hung Ga from an elderly man next door. He had studied Dragon Style from Master Choa Sum. On the weekends he would go to local parks and watch grownups practice their Kung Fu. At the age of seventeen,

Sifu Chow finally found Sifu Ng Wah Sum and began his traditional training of Wing Chun. He was fascinated by Wing Chun's economical techniques. He especially liked the Sticky Hand Sensitivity training. It allowed your techniques to go with your opponent's power. It fits Bruce Lee's go with the flow concept "be like water".

Sifu Chow is the founder of Integrative Wing Chun which carries not only traditional Wing Chun of Yip Man's linage, but also Wing Chun to a new level of martial arts. His passion of Wing Chun grows stronger as everyday passes. One of Sifu Chow's favorite books is I-Ching which is a 5,000 year old book about "evolution". EVOLUTION is eternity. His Integrative Wing Chun IWC is a byproduct of I-Ching and a process of evolution. Sifu Chow has been teaching Wing Chun in New York area for over 36 years. He has taught over hundreds of student. He has total of 13 videos and a Wing Chun 8 Theories poster. Just the Mok-Jong (Wooden Dummy) alone, he has three videos covering this form. You can browse his video list by clicking here videosale.html. He conducts seminars on premise for national and international locations regularly.