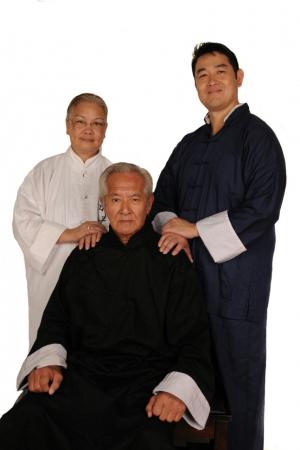 DISCIPLESHIP The True Meaning of Discipleship In Cantonese, “Yup Sut Dai Gee or Yup Moon Dai Gee," directed translated, “In the Back Door Skill Son” is the Chinese Saying of Discipleship. There’s a different between student vs. disciple - Student is in the process of learning skills and focusing on the art, which later may become a disciple. However, Disciple is beyond student - which means it’s ALL about representing and defending the honor of his master’s name, master’s school, master’s art, master’s family, and master’s reflection himself, and it’s not to be taken likely because everything about the master is in the reflection of his disciple. It’s no longer about herself or himself, it’s ALL about the whole as ONE. Whatever a disciple does has a reflection on the master. For example, if the disciple shows bad manner or sets a bad example, it will reflect directly to the master and the school, especially in the public eyes, or on the other hand, if the disciple shows honor and displays a good character in the public, not only the disciple praises for but the master will always praises ten folds of that because it’s the echo about everything that master taught the disciple. Disciple’s duties: When the Master is out, the disciple is in charge during his absence to look after the school to ensure everything is in place as usual, even though his Master is not there. Besides, school and daily operation are to be running smooth, the most and foremost important, the Disciple is to be ensure that the Mou Daak(Martial Arts Virtue or Benevolence) is upheld at all times in his Master’s reflection. Therefore, it’s important for the Master to handpick and select that someone to be his Disciple who has a strong and good character besides skills. However, more important than just skills, it’s Character - Skills can be learned and attained due in time and practice, BUT Character and Good Moral can NOT be learned or attained - it has to come from the heart. Imagine if someone was born with a certain personalities or traits, she or he can change temporary, but toward the end, she or he will come back to her or his own nature, unless she or he has gone through dramatic situation or it must be a miracle to take place. How often do miracles happen even though anything is possible. All in all, the Disciple has to be proven herself or himself to be honorable, loyal, peacemaker, unselfish, and think as the whole not just herself or himself without any doubts. The Disciple MUST ALWAYS put her or his Art, her or his Master, and her or his Ancestors ABOVE ALL things, including herself or himself. It’s her or his sworn duty to honor the Art, the Master, and Ancestors by keeping the Name and the Lineage pure and to the highest honor as possible. To become a Disciple is that same as adopting a parent that is not something to be taken lightly. ONE MUST AND WILL swear to take an oath that to be bound to her or his school and Master until death. It's a Warrior’s Word that is like an arrow; once it’s released, it can NEVER return back. In Western countries, most people seek discipleship for all the wrong reasons. If you want to become your Sifu’s Disciple, consider your own motivations first. It is not what your Art can do for you, but what you can do for your Art. You do not become a disciple to promote yourself; however, it’s quite the opposite. The bottom line is to abandon your own selfish thoughts and dedicate your practice to others, instead. It’s not easy, but let the Warriors’ Spirit guides you with faith and confidence, and think you were picked for a reason by your Sifu. Therefore, Discipleship once accepted as the title, it’s a great honor as well as it comes with the great responsibilities with that title - That's the true meaning of Discipleship. By Sifu Clark Tang Chief Instructor of WING CHUN TEMPLE-Wong Long Wing Chun