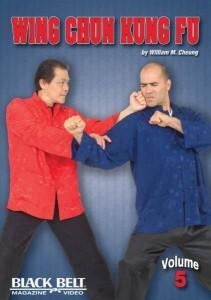 "In this DVD, Cheung teaches the Wing Chun fighting strategy, including grappling defense and weapons defense. An introduction to dim mak (death touch) and advanced chi meditation are also covered in this volume.

This is the last volume of William Cheung's Wing Chun Kung Fu series. I have watched this single copy of volume five more times than I would like to say. My conclusion is that I was primarily left with many reservations regarding much of its content. The technical aspects of Wing Chun Kung fu which are performed in this DVD are certainly not in question. It's obvious that Master Cheung and Sifu Oram know what they are doing. However, I actually felt this last volume is more filler used to promote and market a five volume set than to provide additional useful information or content.

For example, the discussion and subsequent demonstration of Wing Chun's Centerline Theory and its importance in protecting one's center during combat was more than adequately dealt with in the previous volumes of this series. I felt much of what was presented on this subject was redundant. Cheung's demonstration of moving toward an opponent's blind slide while controlling the centerline was covered in the first three volumes.

If one wasn't able to understand this crucial point by the time they got to the fifth volume, then perhaps they should decide on using their time more productively in learning something new…like needle point maybe! Most of the techniques shown were a rehash of what was presented before… nothing was essentially new that was presented within William Cheung's B.O.E.C system of fighting. There were, however a few hand techniques which were used in blocking some kicks that were of interest, but most of these techniques were demonstrated before. It was a good review anyway.

Some of the techniques that Master Cheung demonstrated against different styles of fighting, I found unacceptable, particularly with those against a so called grappler or wrestler. In one instance or combat scenario, the opponent attempts to grap a leg and the counter move to this was to push the head down toward the floor while hitting the pressure points at the back of the opponents head… then if desired one could secured the opponent with a follow-up arm bar…well there you have it …problem solved!

This type of maneuver might be successful against someone who is totally inexperience in working on the ground and literally stays there while you decide to hit him from above… and then you could follow-up with a Chin Na technique…this seems quite misleading to me. In my opinion this type of technique would not work against someone who is experienced in moving toward an opponent and employing a grappling technique which is similar in principle to Chi Sao and taking them down. A good grappler knows how to move the entire body not just in using their hands!

The Dim Mak system or death touch strikes which were demonstrated in this DVD was an interesting point of departure from the purely heavy handed techniques using punches, palm strikes and double hand movements to incapacitate an opponent. Hitting these pressure points to disable an opponent requires great skill and patients in training. Knowing generally where these points are located on the body is just not enough.

One has to know how to strike a point as Master Cheung demonstrated in previous DVD's of this series, The Wing Chun practitioner must train and prepare the hands so they are able to sufficiently penetrate an opponent's vital points. No mention was made in this DVD on how one should correctly train the hands for this system. No mentioning of the appropriate Chinese herbs or medications which are necessary for this kind of training was discussed. Not only are the points one strikes are important in the Dim Mak system, but the time of day and seasonal influences theoretically are factors that determine the extent of damage which is inflicted on ones opponent.

I strongly feel if you are going to use the term "death touch" that some precautionary note should be said regarding this system's method of deadly attack. There are no books for quick reference that I have seen lately at your local bookseller on the Dim Mak method. However, I'm sure if one is resourceful enough it could be found. With the proliferation of martial arts material out there today someone has probably published something on this subject…I remember from the old days the methods and teachings of Kung-fu were closely guarded and you were very lucky indeed to have been taught any part of a system. Particularly, if you were not Chinese or you did not have close ties with a Chinese Family or Chinese linage of Kung Fu. We certainly can see that times have definitely changed! So if you are able to locate a copy of "Dim Mak For Dummies!" Send me one… it would be greatly appreciated.

The defensive methods which were demonstrated in this DVD against different types of weapons, I found interesting, particularly when Master Cheung showed how an attack using one's empty hands against a short club or staff could be used effectively in disabling and disarming an opponent in the process. However, if you plan on disarming a person with a very sharp knife and they know how to use it…you better know what the hell you're doing! In spite of what think you have learned and practiced by watching a DVD. Don't fool yourself! So…in this regard…I leave you with this parting thought…there is Kung Fu and certainly in some situations there is "RUN-FU!"

Oh' there is still one other part of this DVD I almost forget to mention, which was the section on advance Chi Meditation. In all of what Master Cheung had to say regarding this aspect of practice it could have been adequately cover in volume one where it was first introduced. Enough said.