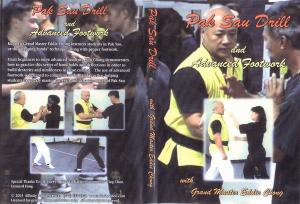 As in all martial art styles there are training drills which are specific to the development of skill for which a system is known for, Wing Chun is no exception.  However, training in the basic hand drills in this martial art system are unique, they are designed to provide development in sensitivity as well as sharpening one’s awareness in the application of technique.  Master Sifu Eddie Chong provides an excellent introduction into this training art.

The Pak Sau drill sequence is designed to teach one to block and hit at the same time.  Although the blocking in Wing Chun is a misleading term, one does not block…you are either covering or hitting…the cover is actually a hit! This is what makes the Wing Chun such a unique fighting system.  The Pak drill sequence teaches you to use both hands simultaneously.  Master Chong’s shows the learner the basic and intermediate skills associated with this training sequence. Offense and defensive applications are learned in partner practice. There are of course differences in how this drill is applied in training, some teachers will express variations in its basic flow of movement, however, the purpose of style or expression of sequence in the drill is the same.

Master Chong explains the basics of the Lap Sau drill and shows how the hands are held to maximize coverage and application of technique.  Here in this DVD the Pak Sau hand is taught within Lap Sau sequences. Some teachers chose to teach these drills as separate entities.  The drills are essentially intended for the learner to use inside and outside bridge techniques.  In the Pak Sau drill demonstrated by Chong, there are three basic sections in the sequence.  Variations in this sequence are shown in case the attack sequence changes.  Blind fold training is included in the drill, it can start early in the practice, however, care should be taken during the early stages of this kind of training, making sure one’s partner  is not injured.  Again, the purpose of the drill is to develop sensitivity; it’s not a “Rock’em, Sock’em" exercise.  Chong also shows how one may change hand techniques, during the Pak Sau sequence using Lan Sau, Bil Sau and palm strike techniques.

Some teachers only show this drill in a stationary posture…this of course is important in the beginning, however, Chong incorporates movement in later stages of the drill, that is demonstrating the stepping in and out sequence during  the execution of the Pak Sau hands. In reality your opponent can change his position, one must also learn to adapt to this kind of situation.

In addition to the Pak Sau Sequences advance foot work training is included in this DVD. Chong’s emphasizes the fifty percent weight on each leg…he does not apparently use the empty stance posture where ninety eight percent of one’s weight is on the back leg. This is a matter of personal choice…as he would say “to each his own.”  The foot work practice is done in all four directions and is accomplished effortlessly whether an opponent is circling you or coming straight in.  The movements can also be done in a diagonal direction.   The stepping patterns are shown by Master Chong in normal and slow motion sequences.  It’s evident in Chong’s demonstration that Pak Sau training and foot work is a coordinated skill; it only can be achieved with practice.

This DVD provides excellent training material on the basic skills which Wing Chun practitioners must learn. I recommend the purchase of this drilling DVD for anyone who desires to learn different ways one may train in the Wing Chun Kung system.