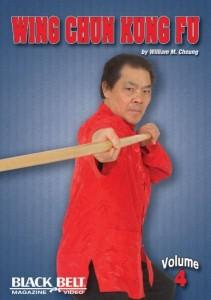 This DVD is the forth in the five volume set of William Cheung's Wing Chun Kung Fu. It covers the basic weapon forms of this system. These weapons are identified specifically with Wing Chun Kung Fu and are known as the Butterfly Swords or Knifes and the Dragon Pole. The basic applications in the use of these two weapons are also covered and are demonstrated by Master William Cheung and Sifu Eric Oram.

The Butterfly Swords or knifes are performed by William Cheung. Sifu Eric Oram again provides the narration for this DVD and describes the history behind the origin of this unique weapon. According to legend they are called Butterfly Swords, because they rotate inside and outside of the body as they are used in their application. One gets the impression from Sifu Orem's description that the swords have to be custom made and must be a certain length which meet the needs of the user's specific physical dimensions. It is said the blades of each sword cannot be too long or two short. If they are two long they may cause personal injury as they rotate inward, if they were too short the weapon's effectiveness could be greatly sacrificed.

The specific origin of this weapon is reported to be from the Shaolin Temple in China and was used by the Monks to protect themselves from bandits. This weapon was said to be cleverly hidden within their boots. Because of the religious and spiritual practices of the Monks, the swords were used only to maim rather than to kill their opponent. Only the secondary targets were used whereby injury was primarily inflicted at the joints of their attackers.

As in William Cheung's previous DVD's he demonstrates the form at normal speed which is actually done quite swiftly. He then performs it slowly so that the forms individual movements can be discerned more distinctly. Historically, the Butterfly sword form was developed from the Wing Chun fighting system and employs the strategy of using blocks and counter attacks at the same time. It can be easily seen from the movement of the arms and hands within this form that they are executed in unison and with footwork based on Wing Chun's Centerline Theory of defense and attack. It's emphasized by Sifu Oram that it's extremely important to perform the swords movements so that they become an extension of the body. The weapon's instructional sets are demonstrated by Cheung and Oram, and are done within manageable chunks or sets so the student can easily follow through with each group of movements. Movement within these sets may seem to be highly structured and complex at first, but can be learned by doing one side of the form first. Some students in the beginning might find the figure eight pattern sword set most difficult to do when they are trying to move both arms and hands at the same time. This is where one side of the figure eight pattern should be done separately. It might seem hard at first, but with practice this task can be easily accomplished.

Fortunately, these instructional sets are repeated several times by William Cheung as he describes the Butterfly sword sequences using the Wing Chun system nomenclature. This approach should reduce the learning curve associated with acquiring the complete form. It also contributes to the student's further understanding of the form's technical expression and how it relates to the Wing Chun fighting system.
Before the numerous sword form applications are demonstrated one is shown by Master Cheung, how to hold the swords while standing in a cross sword fighting posture. The posture and its associated techniques for defense must be learned and done correctly After this initial segment of training is understood and completed; one on one sword applications are taught against an opponent using the Butterfly Swords in partner practice. And when the need arises one learns how to make use of the Butterfly Swords against a person using a different kind of weapon such as the Dragon Pole.

Following the instruction of the Butterfly Swords or Knifes, Master Cheung demonstrates the Dragon Pole form. The Dragon Pole is quite different from the Shaolin Stick normally associated with the Shaolin Monks. It can be much heavier and longer in length than the Shaolin Stick. Because of its length and weight as well as depending on the skill of its user a tremendous amount of power can be generated. The Dragon Pole form can also greatly contribute to ones development of balance, strength and agility. The purpose of the Dragon Pole is to strike at the secondary targets first, such as at the joints of the legs, feet and hands …et cetera. Once these points are effectively struck, this opens up the opponent's primary targets such as the groin, solar plexus, the throat and head. It is said the length of the Dragon Pole can vary in length from six to thirteen feet. Master Cheung demonstrates the form in normal speed and in slow motion following with the Dragon Pole's Applications. This forth volume in the five volume series offers an excellent introduction to the weapons uniquely associated with the Wing Chun Kung Fu system. I recommend this DVD for those who desire to learn the basics of the Butterfly Swords and the Dragon Pole along with their basic applications.