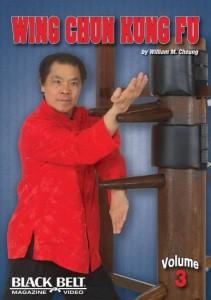 This DVD covers the use of the Wooden Dummy training apparatus or what is known as the Mook Jong of the Wing Chun system. The demonstration of the Wooden Dummy form is jointly performed by Master William Cheung and Sifu Eric Oram. The Mook Jong form consists of 108 classic movements specific to the Wing Chun system, in this DVD its self-defense applications are shown in eleven training sections. The basic and advanced techniques of the Mook Jong are derived from the Si Lim Tao, Chum Kil and the Bil Jee forms and are integrated into the "traditional system" of Wing Chun Wooden Dummy form as promoted by Master William Cheung. The advanced techniques of the Chi Sao system are also covered, which includes a demonstration of the cross hand Chi Sao training scenario.

The Wooden Dummy form is demonstrated by William Cheung, in a very fast sequence of hand techniques and footwork. He then follows with the complete sequence showing the form in slow motion. This DVD is an excellent instructional medium that clearly shows how the Wooden Dummy or Mook Jong, becomes a useful tooling in learning the techniques of the Wing Chun system.

One can readily see how important the Wooden Dummy sequence teaches proper foot work, positioning, placement of blocks, balance and the judgment of distance. One's sense of timing, the flow and coordination of technique in using the Wooden Dummy and with its three extended arms, enhance skill development, because it simulates blocks and strikes to the upper, middle and lower gates of an opponent. The Mook Jong, also becomes functional in simulating an opponent's lead leg making it helpful in training for kicks or learning to move toward an opponent's blind side or to position one for leg techniques, which could be effective in the training of foot sweeps and throws.

The student will be able to see and easily learn the Wooden Dummy form and its applications. Master Cheung and Sifu Oram, structured the learning of each sequence by chunking down the form into manageable training sets from its beginning, to its end. They developed eleven training sets of the Wooden Dummy form specifically for this purpose. However, practitioners of other Wing Chun styles might see stylistic differences in the Cheung solo version. For example, the Wooden Dummy form usually begins with a traditional opening somewhat like the first part of Si Lim Tao. William Cheung's version of the Wooden Dummy form dispenses with the traditional opening and immediately proceeds with closing the gap by moving forward with his left leg up and its knee at waist level simulating a leg block or jam to counter a kick. One can easily see the position of the stances or postures exhibited in this version are indeed much wider in foot placement as it is demonstrated by Sifu Oram. It differs slightly in posture from what might be expected or exhibited by someone who had trained in the Wooden Dummy form in Fushun or in Hong Kong, China! Now, does that mean it's wrong…my answer would be an emphatic NO! It's just a different approach! The actual techniques which one sees in the William Cheung, version for other Wooden Dummy forms are essentially the same in sequence and used for the same combative purpose.

In the last instructional section of this DVD, Master Cheung and Sif Oram, demonstrate some of the advance techniques of Chi Sao practice. Cheung emphasizes how important the use of forward pressure is in the double hand Chi Sao. The balance and matching of your partner's forward pressure is crucial in keeping them at their proper distance or outside of one's circle of vulnerability. For example, if one uses too much pressure for instance in a forward direction, up /down or to the side, in a double hand Chi Sao sequence regardless of the hand or technique one is using, it can become a definite disadvantaged. The basic purpose of Chi Sao training is not as a "Rock Em-Sock-Em" drill to see if you can hit the other guy, but it's a method to develop sensitivity, contact and response capability in close quarter combat situations. Learning how to perform the Chi Sao correctly from the beginning is so important and cannot be over emphasized. Master Cheung, in this segment of the DVD begins to set a strong foundation for the Wing Chun student in the Practice of Chi Sao and in the development for advance skills.

The proper position of one's hands and arms is essential in developing skillful technique. For example, Cheung shows how one can use a Lap Sao hand, against an opponent who is using an improper Fook Sao technique, which can leave the opponent without Jet Sao hand protection. He demonstrates how the opponent can be led successfully into a cross hands position, thereby allowing the trapping of both arms at the same time giving one the opportunity to strike at the opponent's head with the free hand.

He also shows the use of covert a hand which comes from underneath one's rolling hand sequence and quickly seizes the opposite arm at the wrist for the beginning of an arm break. He shows also how the hand is used to seize the wrist, while using the elbow that comes over the opponents extended arms. From this position you have several options to strike the opponent, either using the Chuan hand which is free or coming back with a second elbow. He also shows how one can defend against the elbows if such a technique is used.

This DVD is packed with a variety of double hand and cross hand Chi Sao techniques which incorporate kicking strategies while doing the double hand drill. Learning how to effectively use kicks and hand techniques at the same time can befuddle many antagonists. Master Cheung also shows various ways one can use in defending against kicks within close quarters. For those individuals beginning to learn Chi Sao, this DVD presents an excellent opportunity to experience and learn about the diversity of its techniques. This would be an excellent acquisition to anyone's collection on Chi Sao Training.