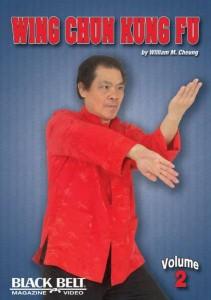 Sifu Oram again narrates the first part of this DVD with a brief introduction about the purpose of the Bil Jee form. He states that during ancient times it was regarded as the most coveted and considered as the most secret form of the Wing Chun system. This form was in fact kept from many Wing Chun disciples considered not deserving of its teaching. This form was designed for close in striking using powerful movements of the hands and arms coordinated with kicks and foot work.

The form's techniques incorporate short range movements of the elbows and long range attacks of the fingers. Both arms and hands are coordinated and employed at the same time; they are used with extreme speed, accuracy and penetrating power. The Bil Jee form within the "traditional system" as demonstrated by William Cheung, employs stances and step patterns such as the side, front, neutral, circle, and T positions. The most important aspect of this third form is to "gain control of an opponent's energy and taking advantage of the openings it recreates." In observing, William Cheung's version of the Bil Jee form, he performs the foot work in more angular and forward directions combined with the fluid movements of the attacking hands. This foot work and double hand movements of the Wing Chun "traditional system" are different from the so called Wing Chun Modified Bil Jee form.

For example, the foot work in the modified Bil Jee version is performed directly from right side to left side as exhibited by Wing Chun masters such as Augustine Fong. This difference can be readily seen throughout the modified version while the elbows and Bil Jee hands are used. However, that doesn't mean that one can't figure out that forward foot work using angular movements and postures, with kicks, can be in the same way as William Cheung does!

In relationship to the third form's method of defense and attack, Sifu Oram, uses the terminology of "before contact" the moment at contact and the exchange stages during contact, as a way of organizing an understanding of the unique fighting strategy of Bill Jee. He also states in his introduction that Wing Chun practitioner are taught techniques such as the use of trusting fingers, which are not generally associated with the Wi ng Chun system. However, no further explanation was given for the reason or reasoning behind this statement. I feel this was an extremely important point and needed to be elaborated on with further detail.

The characteristic movements of the third form incorporates the triple sequence of the elbows and the Bil Jee thrusting fingers technique which lead into four sequences beginning with the elbows and Bil Jee movements. Master Cheung demonstrates how the hands and fingers should be used, in order not to injure them while applying the techniques. He emphasizes that strikes done with the fingers are done at certain angles and not straight on!

In the Bil Jee form each sequence begins with elbow strikes differing in number, its use depending on whether one is striking over or under the opponent's arms. Frankly, any narrative attempting to describe the speed, power and versatility associated with the Bil Jee form simply cannot do it justice. One has to actually see it, to believe it, when it's demonstrated by a skilled and experience master such as William Cheung!

What is intriguing about the third form as well as in the performance of the first two, demonstrated by Master Cheung, in Si Lim Tao and Chum Kil, is how different they look compared to the three forms taught in what is considered as "Modified Wing Chun." I think in terms of practicality each style can contribute to ones practice and each has value in their own right. For example, the stances used by William Cheung, taking the Ma Bo stance in particular, is much wider from the shoulders in Si lim Tao, than exhibited by a practitioner using a narrower stance which is usually not wider than the persons shoulders. If your practice has been consistent and substantial in using this narrower stance, one's root and subsequent technique could be quite formidable while generating power from a shifting horse.

In some close quarter situations, you may not have the opportunity to set into a side forward stance, which is wider and places one's weight momentarily on both legs…somewhat similar to a bow and arrow stance, but yet not quite as deep with the back leg slightly bent; with the arms and hands extended guarding the centerline. In this type of stance ones movement is more pronounced and noticeable. Using a narrower stance, in a forward position, with the front leg appearing weighted yet empty and your weight on the back leg for support can fool many in thinking that if you're going to kick it will be with the back leg instead of the front. This would be a great mistake for an opponent to make, because the kick with the front leg can be done extremely close, it can be covert, and so quick the person receiving it would not know where it came from until it's too late. Remember, it's the person that ultimately fights; martial art systems and their associated techniques are options and offer choices one didn't have as a skill set prior to training. This is only true, however, if one practices what they have learned and it becomes an integral part of them.

That last part of the DVD, is on Chi Sao training. Chi Sao in my opinion, is the heart of the Wing Chun System, regardless what style of Wing Chun one practices. In basic Chi Sao instruction, one starts off with learning the single hand Chi Sao movements in solo. Once the basics of this sequence are learned it's then done with a partner. In practicing this sequence, one joins the arm and hand with a partner. That is, one extends their right hand and on the opposite side one's partner extends their left hand.

While standing in a Ma Bo posture, one partner starts from a Tan Sao hand and moves downward with a palm strike towards the partners lower ribs. The proper movement in this basic sequence against the palm strike, proceeds from a Fook Sao hand followed with a Jet Sao hand as a counter. From the Jet Sao counter, a strike with the fist or a Chuan hand is used as an opposing attack towards the partners head. One's partner blocks the Chuan hand with a Bong Sao. The arms and hands of both partners drop to their original position with the wrist of each of the hands at center line and the elbow of the Fook Sao hand about three inches from the floating ribs. This sequence can be performed on one side numerous times, and then partners switch hand positions so that each has an opportunity to learn both sides or hand sequences.

This basic sequence is not only practiced numerous times until it's instinctive or natural, but ones sense of movement and sensitivity is done so that one's "silent mind" performs the proper sequence before the "talking mind," engages in the process of awareness or understands cognitively. The Chi Sao in the single and basic double hand sequence is a simple drill, but it's essential in learning to use technique in close quarters. William Cheung and Sifu Oram, demonstrate how this basic Chi Sao blocking and striking sequence is used in training both hands and arms at the same time.

The movements of the double hand, counter strikes and trapping methods can become quite complex as one advances in skill. Cross hand Chi Sao technique can also add further variety to the sequence. Although not shown in this DVD series, one's position or stance can move or change with the double hand Chi Sao simulating a more real life challenge to one's level of skill. However, it should be said, that one cannot learn the principles of Chi Sao, without a qualified instructor, it is paramount that one learns from someone who understands and knows the proper feel, the right amount of forward pressure and demonstrates what not to do in the beginning!

What is notability missing from this DVD Wing Chun set are the proper training techniques for the legs and feet. This type of training uses what is called the Chi Gert method of joining the legs in partner practice and basically has the same objective in developing ones sensitivity, proper structure and force with the legs and feet as the Chi Sao does for the arms and hands. In fact one should consider their feet in training, not as feet per se, but as hands! The first two volumes and the one that follows, where Master Cheung, demonstrates the wood dummy form and its various applications, I feel are the most valuable of this five volume series.