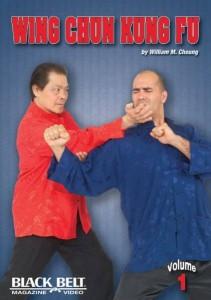 A brief introduction of the Wing Chun Linage is given, William Cheung and his association with Bruce Lee, demonstrations of Si Lim Tao and the Chum Kil forms; the first two forms of the Wing Chun fighting system. Wing Chun basics are presented along with defense techniques including drills incorporating empty hand forms and foot work. A basic presentation of a Chi Meditation standing posture, showing the position of the hands with a description of its purpose and relationship to the median acupuncture system and the flow of Chi energy.

The first part of this DVD is narrated by Eric Oram, William Cheung's Wing Chun assistant and demonstrator; he is also featured in the subsequent volumes of this five volume DVD set. Sifu Oram introduces, William Cheung as the current Grand Master of the "Traditional" Wing Chun System, who at the time of this DVD production had forty years of teaching experience and is the author of many articles and books published on Wing Chun Kung Fu. Furthermore, Sifu Oram presents Grand Master Cheung, as 8th generation and direct linage holder of Wing Chun founded by a Buddhist Nun of the Shaolin Temple, who is historically known as Ng Moi. However, there is no mention of Ip man and his connection with the former grand master in this short biographical narrative given by Sifu Oram. William Cheung's relationship with Brue Lee is described as Lee's senior and first principle teacher, where he had taught him the techniques he used in many of his martial art movies produced during his legendary film career.

For those students, who are studying and learning the "Traditional Wing Chun System" under the auspices of William Cheung, will find this first DVD volume as an excellent instructional piece. Care is taken to show the first form in normal speed and in slower form so the beginning student can readily understand the sequence, consistency and flow of movement.

The Si Lim Tao form applications are separated into numerous segments emphasizing the use of the basic hand forms and associated footwork. This approach gives the student time to assess the relevant position of the hands, their relationship to the opponent's center line as they are applied during each technique. All techniques are shown at least times on both sides of the body or as it would appear from a right or left position.

Critical in the successful use of these basic techniques, is maintaining control of the opponent's elbow, its leading arm while moving to the blind side. William Cheung explains in detail his system of fighting strategy, which he refers to as B.O.E.C or Balance, Opening, Elbow and Cross arms. He demonstrates how this approach gives a Wing Chun fighter a definite advantage, particularly when it becomes necessary to use a trapping hand; a classic Wing Chun maneuver which is not expected by an opponent attempting to counter within a close exchange of fighting hands. The first forty minutes of volume one is spent on Si Lim Tao, which sets the foundation for the more complex movements of the second and third forms.

The demonstration of the system's second form, "Chum Kil" is done in somewhat in the same fashion as Si Lim Tao, showing the essential aspect of closing the gap between one's opponents. For example, more complex movements and techniques begin to emerge as footwork closes the gap while using various techniques employing a front kick followed with Jet Sao and palm strike sequences. Various combinations are shown using not only damaging kicks to the knees, but also the use of striking points or hitting pressure points to further disable an opponent's response capability. William Cheung shows you where to hit the wrist and arms using these striking points to your advantage.

Unfortunately, when you're towards the DVD's conclusion, one has the feeling that an equal amount of time should have been given to the second form and its applications. But in that being said, once you understand the techniques used in the first form you can also combine and use in the second, which will give techniques.

The DVD concludes with basic instruction on Chi Meditation. You are shown a basic standing posture, how one connects the two meridian points using the tongue and the placement of the arms and hands in relation to the chest. The position of the hands is somewhat like holding a small barrel or hugging a tree. The practitioner is also shown a simple method of testing one's practice by slightly moving the hands toward each other. During this slight movement of the hands one may experience a tingling feeling, evidence that indeed something is happening. This basic Chi Meditation technique is essential for developing a sense of "courage," focusing and calming the mind.