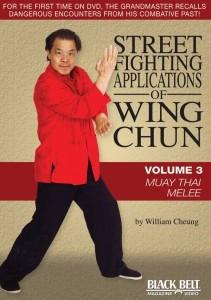 This DVD is the last of a three volume series about street fighting applications of Wing Chun system. In this edition discussion and the application of Wing Chun methods of attack and defense are emphasized in dealing with a Muay Thai martial art Challenger.

With the growing popularity of mixed martial arts and Muay Thai boxing, Sifu Eric Orem asks Master William Cheung if he ever had to fight a Muay Thai boxer. Master Cheung shares with the viewer a past encounter he had with Thai boxers in the spring of 1962, while living in Sidney Australia. It seems that during Cheung's early years, he often had to defend the honor of his friends who were bullied by local tyrants. His friend Howard, in Sidney, was often harassed by some Thai boxers attending the same local college, and he had asked William Cheung, to speak in his behalf and request from these guys if they would just cool it. So a meeting was setup to take care of the situation. Of course Master Cheung was victorious, but he did sustain some injury. This is an interesting story, because at times when your buddies say they will be right behind you, but when the action starts they're nowhere in sight. I won't spoil the details of the fight you'll just have to get the DVD to learn how Cheung dealt with the challenge of facing three Muay Thai Boxers on his own.

This DVD is of interest, because it provides the Wing Chun practitioner detailed strategies in dealing with multiple attackers. Master Cheung shows how one should approach and move through the attack as it unfolds; this is critical in reducing the possibility of getting injured. One learns how to employ the strategy of attacking the group at either side of their extreme left or right blind side. Master Cheung also demonstrates the reasoning behind using a neutral stance against the Muay Thai Boxer and how one's attack would be far more effective as a result. Cheung provides also technique to deal with the kicking opponent and when sweeping kicks are attempted. He gives good advice in telling the viewer that you don't block with both hands, this exposes your upper body, particularly your face for an attack.

This DVD is packed with excellent applications and practice drills which would improve your coordination of hand and foot techniques in the Wing Chun System, for the general practitioner this instructional video wo
uld be a wise investment.