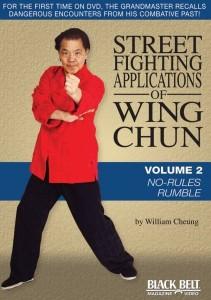 Sifu Eric Orem continues with his interview of Master William Cheung's street fight exploits and his demonstration of Wing Chun applications for fight situations where there are no rules.

Master Cheung talks about his encounters with Hong Kong's Triad's or street gangs of the 1950's. He gives an historic account of the three most powerful gangs during one of China's most tremulous eras after World War II and how the various gang organizations immigrated throughout the world establishing a network of gang associations in San Francisco, New York, Hong Kong and Shanghai, as well as in South East Asia. The Triad or what some have referred to as the Chinese Tong, Master Cheung stated that many of China's historical figures of government came out of the triad system. One can assume that even today there exist apparent links with members of the Central Committee of the People's Republic of China. Even though the west has had a tremendous impact on the country's economic development, traditional customs are still very strong in many of the cities and in the small villages throughout China's countryside.

Protecting one's territory and saving face among compatriots is an important code of honor, within the Triad system. Master Cheung, tell us how he was setup by a so called friend to smooth out a problem between one of the rival gangs only to find himself, having to fight off several gang members who attempted to ambush him at a local Hong Kong Café. Cheung was the victor in this violent exchange, but it was a lesson well learned he later acknowledged.

In this DVD Master Cheung, reenacts his fight against these gang members and tells how one would deal with an attack when someone is using an "Edged-Weapon." It's important not to extend your arms and hands, he notes, because you'll likely get them cut. So it's better to keep one's hands close to the body and to use the "cross hand block" as the opponent attempts to attack with a high downward movement, while you have control of the weapon's movement, then you follow up with a kick and arm break. At this point when you gained control of the weapon and then you are able to use it to your advantage.

Cheung shows what not to do, when attempting to block a weapon, so that one can prevent any serious injury from an improper application of the "cross hand block" technique. The master also provides the viewer with a number of techniques which can be used against an "Edged Weapon." During an attack, he places great importance of one knowing how to move to the opponent's blindside giving more of an advantage in one's options to attack and defend. In Master Cheung's demonstration of technique against a weapon it's quite clear there is no mercy that is given to the opponent, if they're attempting to cut you then once you obtain control of the weapon, you return the favor. Again, in the street there are no rules.

The second DVD in William Cheung's street fight series gives the Wing Chun stylist, practical applications and drills against open hand and weapon attacks from swords and sticks or clubs. He tells you what the difference is between what is considered "soft weapons" and "hard Weapons" That is short blade knifes and long blade knifes such as swords and spears. Of interest Master Cheung shows you the various movements in using the Butterfly Knifes for applications. Again this is a worthwhile instructional DVD, not only as a source of information about Wing Chun training technique and applications, but in production quality as well as.