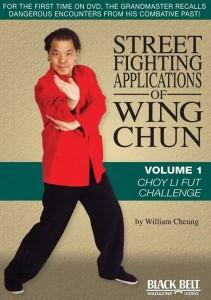 This DVD begins with stories told by Master William Cheung, about his early encounters on the street and roof tops in Hong Kong against would be challengers from different stylist of Kung fu. It's an interesting look into Master Cheung past in how he dealt with fighters of different martial art systems.

There are many rivals among various Kung-fu stylists claiming their system of martial art is the best and of course the ultimate means of defense. The two systems of Kung fu considered as counterpart to each other are Wing Chun and Choy Li Fut. It's often said that Wing Chun is a short hand system and Choy Li Fut, a Long hand system, because of their characteristic approach of defense and attack. In Choy Li Fut, the arms can move what appears like helicopter blades whirling at tremendous speed and where the power is generated from the waist. Choy Li Fut has a unique method in stance training to develop stability and power for its characteristic system of movements.

However, Wing Chun has a unique defense against such technique which is demonstrated by William Cheung and Eric Orem. In watching how Cheung and Orem show the techniques used to defend against Choy Li Fut attacks is an interesting departure from the usual demonstration of ordinary street attacks. One can readily see how Wing Chun technique could work effectively against a Choy Li Fut hand. That being said, however, a technique is only as good as one's skill!

To understand this situation, we might look at it from the perspective of comparing the attributes of two styles of Marital Arts such as in Tai Chi Chuan. Chen stylist considers their school far more powerful than Yang which evolved and barrowed from the older Tai Chi or what is considered Chen Old Frame.

Please forgive me if I seem to be presenting a somewhat abbreviated history of Tai Chi, but essentially it's correct. There are five basic styles or historical families in Tai Chi Chuan, which doesn't include the forms authorized by the Ministry of Physical Education in China. During the early nineteen-fifties the Chinese government decided to combine all of the known families of Tai Chi, which are presently considered the official Tai Chi forms approved administratively by the People's Republic of China. These forms are grouped into sets known as the 24, 32, 38 and 48 Tai Chi systems.

What is characteristic of Chen's power can be visibly seen in its abrupt and sudden expression of force coming out of softer movements compared with the Yang system as it's performed. In the Yang style of Tai Chi you will not find such an expression of power in any of its practiced movements. However, that doesn't mean that they are not there or that technique isn't available to defend against a Chen attack. It's safe to say, that it's not the system that fights, it's the person. Martial art styles or systems do not contain in themselves skill, but options in technique and movement. How well techniques are executed as an expression of any system of martial arts depends on the practitioner.

Wing Chun and Choy Li Fut, in my opinion are not any different in this respect. Or for that matter are any less effective than Tai Chi. For the Wing Chun stylist, it's a tremendous benefit to see how one can deal with technique from other systems, Master Cheung and Sifu Orem, provide an excellent demonstration of how Wing Chun technique is used against Choy Li Fut applications. William Chueng fans, will definitely find this DVD series superb in production quality and would be an excellent addition to anyone's collection of martial art instructional DVDs.