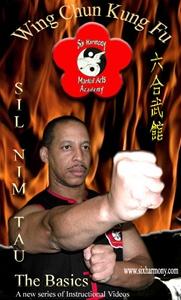 DVD Bought on: Everything Wing Chun

This presentation is on the basics of Wing Chun Kung, specifically on the fundamentals of the Sli Nim Tao form and its associated applications.

Sifu V.A. Thomas demonstrates and provides instruction on the first form of Wing Chun Kung Fu, which is Sil Nim Tao. He is also a certified member of the well-known Ving Tsun Kung Fu Athletic Association of Hong Kong. He claims on the back cover of his DVD jacket that it's packed with in depth information and that there is "no other advance tape like it." However, I didn't really see anything beyond what you would find on other DVDs of the same caliber about Sil Nim Tao basics. Perhaps, Sifu should update this production…this one was made in the year 2000. He might have considered it as the DVD which set the standard then, however that was eleven years ago.

In part one he presents the Sli Nim Tao form with applications. However, there is a contradiction one can readily see as he demonstrates the first form. Specifically, when he begins the sequence, he does a sort of wiggly motion…perhaps, it's an application of a known principle of the Chen Tai Chi opening that allows one to sink and root which provides more power. Yet, none of his students assisting him in his demonstration performs the opening that way. One then is left with the question, which of these forms that he shows is considered the orthodox Sli Nim Tao? In my opinion he should have commented on why he performed it as such, the principle behind it, if there was one. Perhaps, it's a Wing
Chun secret that is presented non-verbally for the anointed or was it just a stylistic expression on his part. Beginning students certainly need consistency in their practice and there should be no ambiguity about what's done and is considered correct. In terms of instructional value this is my only real criticism of this production.

There is indeed, however, aside from this is one point, there's a lot of excellent training methods which he presents in this DVD. One of the most informative aspects a novice would find about this production is that he provides all of the Wing Chun terminology of the first form and pronunciation of the different hand positions and movements. I consider this as crucial in ones beginning practice, particularly when an instructor uses a Wing Chun term; one definitely knows what it's in reference to.

As one would expect Sifu Thomas presents the three basic hand movements of the system, which are Tan Sao, Bong Sao and Foot Sao these movements are essential in learning the single and double hand Chi Sao basics.

Sifu also presents foot work exercises in partner practice which I find interesting regarding its training benefit and the possible applications which could be derived from it. Foot work is so essential and is not only important in closing the gap between oneself and the opponent, but how to maneuver in the case of being grasped by an opponent and being moved in a direction you don't want to go. Knowing how to keep one's balance in such a situation is critical for the application of technique and the ability to counter attack, however, once your balance has been lost even just slightly at any point in a fight, could have a drastic effect on the outcome. One could be thrown easily if the opponent knows how to use your direction of force against you.

Of further interest in this DVD, was the demonstration of using the Three Star Jong, or bag conditioning. This is quite literally, a heavy handed training method…if you're going to perform this kind of training on your hands; one should know how to keep ones hands healthy and to prevent serious injury. This aspect is not covered in this DVD or the schedule that is associated with this kind of training, which some would call "Iron Palm." All in all, this DVD would be an excellent instructional DVD for any beginning student of Wing Chun Kung Fu.