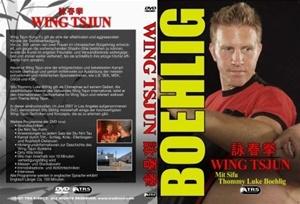 DVD Bought on: Everything Wing Chun

Boehlig starts his DVD with a short description of Wing Chun's history and his lineage though Leung Ting and Allen Fong. He attributes his style of Kung Fu as a "Soft" style in which a person learns to use the principles of Wing Chun through softness, relaxation and flexibility to overcome a bigger and stronger opponent. Like other DVD's of this genre, he approaches the basics of Wing Chun from the idea of ranges…that is, the distance which exist between yourself and the opponent. He talks about the distance where one does not engage the opponent and those distances which involve kicks and those that require punching. As well as the close range zone where you encounter an opponent and you use your knees, elbows and head if necessary.

This DVD is professionally edited and its production quality is superb. Even though this set contains three discs in one package…they are short in duration. The techniques demonstrated are nothing fancy; they are the basic ones which are usually found in the first form of Sli Nim Tao. The use of the front Kick, the Wedge and "Chain Punching" are the three basic movements which are primarily emphasized as a defensive combination. They are simple to execute and quite effective if practiced. Sifu Boehlig, does give a demonstration of the Quan Sao hand and trapping techniques that could be derived from its use, but don't expect anything in depth.

The second disc is titled "FORMS" and is also very short in Length. It starts off with some basic Sli Nim Tao applications. The techniques are very simple and direct such as when someone grabs your wrist and attempts to punch you at the center of your chest and you block using a Tan Sao hand while following up with a punch of your own. The intent here is to show how the movements might be used against a simple frontal attack…but remember, what looks easy is usually difficult to do, particularly when attempting to use a trapping hand.

Boehlig, provides the basics of the first form sequence of Sli Nim Tao in eight sets. Here you're able to see the fundamental application of the Huen Sao and Wu Sao hands. As well as seeing Boehlig demonstrate other basic hand technique, while he uses simultaneous kicks and the application of the knee to the opponents lower gate or the head.

The third disc in this series is on weapons defense and is what presented are the possible scenarios you might encounter and what strategies are available for defense in such situations. All the classic street weapons and defenses one can use are in this last DVD. That is how you defend against a gun, knife, stick or club should you be attacked. Boehlig, I think offers good advice here…if you can leave the situation, do so. The best defense is not to be there! But, if you choose to resist and you have no choice then there are techniques you possibly could use with the hope of being the victor. However, in that being said…your ability to deal with such a situation will depend on your level of awareness and skill development.

Practice is the key to success here…but above all know what the real risks are. With guns…if, you're not close enough to seize the weapon or if the weapon isn't near you, the wrong movement could mean you're dead. I often feel a bit concerned about this aspect of learning defense techniques from a DVD, against an opponent using a weapon. Watching and seeing how a technique can be employed in practice is quite another in real life. So if you desire to become skillful in this area of martial arts…find yourself an expert in defensive tactics in using weapons or specific types of weapons. Never, and I mean never rely on any DVD as your sole source of learning defenses against any kind of weapon.

As a three disc DVD set, this series will offer the novice an excellent introduction to Wing Chun as a fighting system. Its emphasis is on the basics of Sli Nim Tao and how simple the "Universal Solution" can be used effectively in many fighting scenarios.