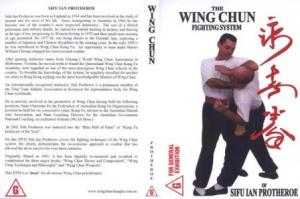 Ivan Protheroe presents his interpretation of Wing Chun as a fighting system and its combative techniques. Sifu Protheroe is also a life member of the Ving Tsun Athletic Association which was established by the first generation of students of Yip Man (Ip Man).

Wing Chun is a complex and effective method of martial arts which includes many techniques found in other systems of Chinese Wushu. However, many of the means used in training and in applications are unique to the Wing Chun system. Sifu Protheroe provides an in-depth presentation of the system's application of the combative arts specific to the trapping hands and takedown maneuvers.

Protheroe, begins his video instruction by organizing the techniques according to three basic fighting ranges…he refers to them as the kicking, boxing, trapping ranges, albeit distances between the defender and the attacker…there are obviously, reasons for using certain techniques when you're at a certain distance from the opponent…techniques which are useful to get inside an opponent's defensive posture and attacks and those that are most useful when you have closed the gap and you're in close with the opponent.

The Wing Chun postures and applications shown; specifically the entry techniques are classic examples of Sifu Protheroe teacher…Master William Cheung. For those of you who are of this school, where its fighting approach is claimed as the sole provider of the "Traditional System" of Wing Chun, then this DVD is for you. Sifu Protheroe, movements and the use of his hands are impressively fast and right to their intended target. His showing of applications are skilled and flawless in there execution. I found the takedown part of his demonstration as notable…he certainly understands the proper use of the angles and trapping techniques; the dynamics of proper movement to make such techniques work, however, in actual use takedowns and sweeps are difficult to employ…it is not as easy as it looks. My only misgiving about this part of the DVD on takedowns was that it did not provide the possible counters or reversals that are used to get out of such a situation. It is indeed the other side of the coin most instructional Wing Chun media seem to avoid. But, I guess those are the secrets, which you're privileged to when you have trained for a considerable time under a particular teacher.

Protheroe, obviously is very pragmatic in his applications approach…one has to adapt the system to western fighting to be effective. Westerns fight in ways that are completely different than from various systems and styles of Chinese Wushu. You just won't find westerns typically fighting from a very low lateral stance or performing a punch from a bow posture. Techniques in boxing are different from those otherwise used in Asia and require a different understanding of application and defense; Sifu Protheroe makes this point quite clearly in his demonstration.

Talented western boxers can be very quick with multiple combinations if they're allowed to get in close! Particularly, among light or feather weight players…heavy weights can also be fast as well. Jabs or multiple jams can be followed up with a second technique or faints can be used that are quick and misleading about what the opponent will actually do next. However, Wing Chun provides a repertoire of techniques that western boxing doesn't have. Being able to sweep, kick and trap with the hands definitely provides far more options; they are slick and covert in a simple and when need be in a complex fashion.

This DVD is really not for the beginner; one must have a thorough understanding of Wing Chun and its three forms, the Chi Sao, its leg training methods to benefit from what is demonstrated. However, if you're looking for an instructional medium that shows you the variety and diverse applications of Wing Ch un's system of fighting then the purchase of this DVD would be an excellent investment.