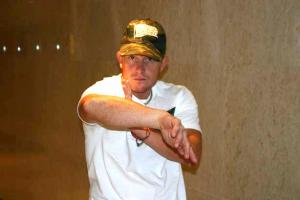 
35 years of martial arts, 20yrs wing chun, 20yrs muay thai, 10yrs pekiti tirsia kali, 10yrs taoist chi kung. Sifu Joffee is originally from South Africa and grew up fighting; he then moved to the UK and worked in some of the roughest areas before settling in the US.  He is a Wing Chun Fight Club member.