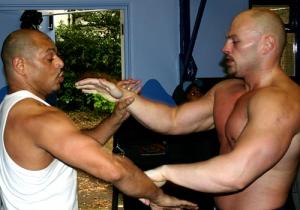 
In October 1978, just after turning 17, Michael Street packed two suitcases and with 100 pound in his pocket he left home to seek his fortune, destiny and a Sifu to indulge his passion for Ving Tsun Kung Fu. Two weeks later, in November, he found himself at the school of a well-known first generation student of the late Grandmaster Yip Man from the 1950’s and Si-hing (Senior brother) to the legendary Bruce Lee, Sifu Victor Kan (Wah Chit) who was teaching in London’s Chinatown district. The training was hard and very serious at that time (Victor had not long arrived from Hong Kong) and classes were conducted in a very traditional manner with lots of sweat, very little talking and occasional spill of blood here and there. Michael applied himself diligently and made progress under Victor’s guidance and no-nonsense approach. Michael’s progress and understanding of Ving Tsun Kung Fu were also greatly enhanced by the constant and invaluable help and guidance of two of his si-hings the late Derek Jones (R.I.P.) and Sifu Desmond Spencer.

In 1984 Derek Jones and Michael traveled to New York to train with his Kung Fu uncle (si-ba) William Cheung on a five day, forty hour course to broaden the knowledge and understanding of Ving Tsun. While there they met the world famous martial artist and Kung Fu film star of the 70’s and 80’s (51 films), Carter Wong, who invited them to a private training session back at his Chinatown apartment down on the bowery. (This was just before the grand opening of his own school in New York’s Chinatown of November that same year.) Carter Wong’s level of skill was truly amazing (and far removed from his cinematic performances). He also showed a great love of the Ving Tsun system stating one of his favorite practices was the 116 technique dummy form.

After leaving New York he awarded both Derek and Michael with two certificates each as recognition of their standard even though they were outsiders to his association. Shortly before this, Michael became involved in security/doorwork in London clubs (1981-2005). Starting out collecting and guarding the money at reggae dancehall sessions in South London and working his way into London’s famous Westend (club land). Ending up (for two five year stints) in the prestigious Ronnie Scott’s Jazz club (est. 1959) This choice of career (which also involved occasional close protection work) along with having to survive in the relatively tough neighborhood Michael lived in often forced him into situation where he had absolutely nothing to rely upon but his Ving Tsun. As the Late Wong Shun Leung would say, he found it to be a faithful servant. In fact it served Michael so faithfully that he vowed to devote as much of his free time as possible to its study and practice, a devotion, which continues to this day.

In 1993 at the prompting of Victor, Michael opened a branch school under his banner in Brixton, South London.

IN October 1995 Michael became a member of the Wong Shun Leung Kung Fu Association U.K. (Established and ran by U.K. representatives, Sifu Clive Potter and Sifu Anthony Kan). Michael then taught for and under the banner of this association for a further two years. During this time, Michael had the opportunity to teach a variety of students (one of which won first place in a national Ving Tsun open competition), including close-protection bodyguards, doormen, professional body builders, schoolteachers, musicians and even a Harley street surgeon.

Through these experiences as a teacher of this unique system, it taught Michael how universally applicable and effective it is for all types of people, and how relatively easily it can be learnt. The governing theories, principles and concepts of Ving Tsun are universal and cross all boundaries of race, culture and physiological body types. In 1997 Michael’s other senior Kung Fu brother, Des Spencer and himself had the opportunity to visit one of Wong Shun Leung’s top students, Sifu Phillip Bayer in Menden Germany in response to his hospitable invitation. On arrival there, they found in him a level of Ving Tsun skill and knowledge that left them both awe struck and eager to resume their learning. They began to train under him immediately and enrolled as members of the Ving Tsun Kung Fu association Europe, an organization set-up and established by the late Grandmaster Wong Shun Leung and Sifu Phillip Bayer with the central aim and objective of keeping alive and spreading Ving Tsun Kung Fu as practiced, taught and understood by the late Grandmaster of Ving Tsun himself, Wong Shun Leung.

In Sifu Bayer, Michael found a man in the highest sense of the word, and a Ving Tsun master of the highest caliber, who teaches and perpetuates his science with both passion and dedication to the most correct and accurate representation of his Sifu’s teachings. As for Michael, it’s been a journey of discovery and enlightenment. Of exploding myths and misconceptions and paying with blood and sweat as the price of knowledge. One could say it was more of a pilgrimage than a journey, one that will continue in the quest for martial knowledge, excellence and understanding until laid to rest. This being the beauty of the Martial Artists Way. It is not so much a trek towards a goal but a state of mind and a way of life. Train hard and live long.