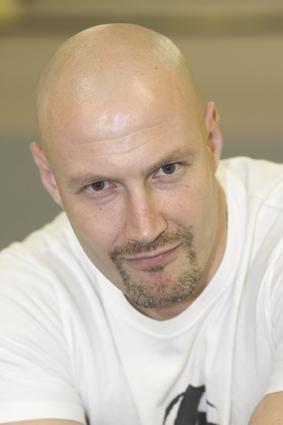 
Stefan Fischer was born in Germany in 1967 and started to practise martial arts at the age of 5 . He practised Judo, Shaolin Kung Fu, Jeet Kune Do, Thai- and Kickboxing and street fighting which led him to WingTsun. For five years Sifu Stefan Fischer trained eight hours a day, seven days a week in WingTsun, under the guidance of Grand Master K.R. Kernspecht at the famous Langenzell Castle by Heidelberg in Germany. He managed nine schools in Germany with hundreds of students. He has been a private student of Grandmaster Leung Ting, Grandmaster Kernspecht, Master Edel, Master Schroen and many others.

His longtime occupation as a doorman and body guard gave him valuable "on hand" experience which now immensely benefits his students. As a bodyguard his services were required by the likes of Chuck Norris, Jean-Claude van Damme and Bob Wall. He has been involved in setting up and running the IPSO (International Protection Service Organisation) and at the same time he was running his own security company. In 1994 he was appointed as Chief-instructor and Representative of the Australian Escrima and WingTsun Organisation (AUEWTO) by his teachers Grandmaster Keith R. Kernspecht (European Chief Instructor) and Grandmaster Leung Ting (World Chief Instructor). The Company name has been changed in 2007 to the Australian WingTsun Network Pty Ltd.

In the year 2000 he was introduced in to the Blitz Hall of Fame as the Kung Fu instructor of the Year. In June 2001, after 4 years of preparation, he received out of the hands of his Si-Fu Grandmaster K.R. Kernspecht and his Si-Gung Grandmaster Leung Ting the 4th Technican Level WingTsun. In May 2008 Sifu Stefan Fischer was awarded the 5th Practician Master Level of WingTsun during training in Germany with Grandmaster Kernspecht, Sifu Stefan was graded personally by GM Kernspecht. Sifu Stefan has joined the ranks of a select group of individuals who hold Master levels in WingTsun. The attainment of the Master Level comes after 18 years of dedicated WingTsun Training and more than 15 years of teaching. Throughout his WT teaching Sifu Stefan has trained several of his own students both in Australia and Germany to Technician levels in WT.