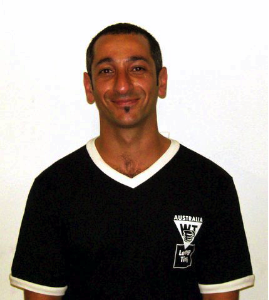 Websites/Social Pages: WingTsun School for Self Defence in Melbourne

Si-Hing Michael Keshishian has been training Wing Tsun since 2002. He is an instructor and a full-time student under Si Fu Stefan Fischer.Michael began training in the martial arts at the age of 15, s END_OF_DOCUMENT_TOKEN_TO_BE_REPLACED
primary teacher/lineage
Teacher Name
Rank Sifu Keheshian Obtained
Still Affiliated?
Stefan Fischer
No


Si-Hing Michael Keshishian has been training Wing Tsun since 2002. He is an instructor and a full-time student under Si Fu Stefan Fischer.

Michael began training in the martial arts at the age of 15, studying Tae Kwon Do for a short time. In 1989 he embarked on a 5 year course of study in Traditional Chinese medicine, Acupuncture and Herbal Medicine. As part of this course, Michael trained kung fu (and continued this training for over a decade), Tai Ji (for 6 years) and Judo (for 2 years).

Then, in 2002 Michael came across the book "On Single Combat". Having read the book, and with his interest and curiosity thoroughly enlivened by Grandmaster Kernspecht's elegant elucidation of the principles of combat, Michael began his training in Wing Tsun. Within in a few months of training Michael was left in no doubt where his martial arts calling lay.

In mid 2004, Michael decided to take his training and commitment to Wing Tsun to a higher level, becoming a full-time student of Master Stefan Fischer, and traveling regularly to Sydney to train under him.

Michael is also an accredited Level 1 coach with the National Coaching Accreditation Scheme (NCAS) through the Australian Sports Commission, and runs his own Traditional Chinese medicine practice which has been in operation for over a decade.
Michael very much looks forward to sharing the art of Wing Tsun with his students.