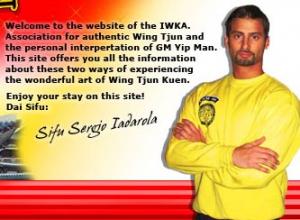 Websites/Social Pages: Kung Fu Amsterdam the HQ of the IWKA


The GM of the IWKA Sifu Sergio Pascal Iadarola started his martial arts career at the age of six with the Japanese art of Judo in the Dutch capital Amsterdam (Holland). At the age of twelve he studied Pencak Silat (Pamur style) and Wado Kai Karate.

During this time he was a big Bruce Lee fan and read everything that had something to do with him. Even writing letters with some of Bruce's early students like James de Mile and Jesse Glover. During these times Sifu Sergio visited as much martial art schools as possible in Amsterdam together with a group of his friends to see the classes or take lessons in the diverse arts the city had to offer.

In that same year he started training WT under Sifu F. Schäfer only to have an unfortunate car accident after one month of training. Nine months later he continued his WT training eventually receiving his 1st Technician level from Sifu Kernspecht the chief instructor of the EWTO in 1994 in Aachen, Germany.

In the period from 1994 -1998 he traveled often through Europe attending many seminars in Germany and in Italy of Sifu E. Botztepe and taking hundreds of private lessons from different WT masters like Sifu H.P. Edel, Sifu S. Avci etc. In 1997- 1998 he was appointed Israeli chief instructor for the EWTO by his Sifu K. Kernspecht and thus moved to the Israeli capital of Tel Aviv where he ran a successful academy until he decided to leave the country due to the political stress.

During a trip to Asia in that year his dream came true when he met his Sigung Grandmaster Leung Ting in Hong Kong privately before having seen him only during his European seminars. After being adopted as a private student by his Sigung Leung Ting, he first went to Zagreb to finish the unarmed system under Sifu Slavko Truntic, so that his Sigung Leung Ting only had to correct him. He took more than 100 hours of private lessons from the Grandmaster in the period of January 1998 till October 2001 in Hong Kong, Sun Tak and even going on vacation with his Sigung in USA Miami to study. During the periods in Hong Kong often several months at the time he had the good fortune to be able to sleep across the school from GM Leung Ting at the house of his friend's aunt and eventually finishing and receiving the corrections of the whole unarmed system of Leung Ting WT under his Sigung in the year 2000.

In November and December 2001 S.P. Iadarola traveled to New York to finish learning the WT weapons: the Look Dim Poon Kwun (six and a half point pole) and the Bart Cham Dao (the eight way cutting broad swords) under his Si-Pak Fong Wai Hung (Allan Fong). Being the first one ever to be taught the Bart Cham Dao from Sifu Fong, during this trip he was promoted to the seventh level practician by his Si-Pak Fong Wai Hung. Due to circumstances Sifu S.P. Iadarola decided in January '02 to start up his association the IWKA to promote and spread the authentic Wing Tjun system.

During the last decade the grandmaster of the IWKA Sifu Sergio P. Iadarola studied diverse lineages of Wing Tjun in China like the Lo family lineage under Sifu Cheng Kwong successor of the late Sifu Wai Check Yan who taught him the Saam Bai Fat and the art of Kam Na, during this time he also went to learn under the son of the late Grandmaster Pak Cheung and Sifu Pak Cheung Kau in mainland China.

During this period he also studied the art of Brazilian Jiu-Jitsu to further his ground fighting knowledge. After this he went on to study the art of the Tang family system of Siu lam Wing Tjun (Weng Chun) of the late Grandmaster Tang Yick under Sifu Tang Chung Pak who taught him the Luk Dim Poon Kwan and Sifu Sunny So (the last student of the late GM Tang Yick) who taught him the rest of the system in intense private lessons.

To further expand his understanding, he also studied both the Sum Nung (Yuen Kay San) Wing Chun system and the ancestor style of all the modern Wing Tjun lineages, the Fukien Yong Chun Bak Hok (White Crane) system, under Sifu Cliff Ip in intense private lessons. He even moved to China to live in Hong Kong in order to devote all his time to the study and research the art under Sifu Sunny So and Sifu Cliff Ip (who have in partnership, developed a new effective system in Hong Kong to teach and promote their brand of martial arts).

He also paid several visits to the GU LO village in Mainland China where the unique Gu Lo Wing Tjun system is found which preserves the last teachings of the late Grandmaster Dr. Leung Jan.

During the year 2010 due to intensive research of Sifu Sergio Iadarola and with the Help of his Friend Sifu Benny Meng Curator of The VTM in Dayton Ohio, who did extensive research in the secret societies Wing Chun systems he was introduced to his Suhu Lin Xiang Fuk (Sifu in Fukienese) in Hek Ki Boen Eng Chun.

Some of his experiences are shared with the viewer on his sifusergiochannel which is one of the best channels on Wing Chun on YouTube.

Currently Sifu Sergio Pascal Iadarola is spreading all his knowledge throughout his association the IWKA which has branches in over 11 countries at present.