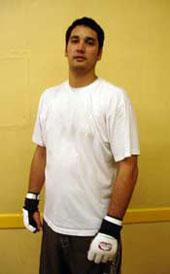 Like many people I first became interested in martial arts after watching many of the kung fu films of Bruce Lee and Jackie Chan when I was very young. The first martial art I learnt was Tae Kwon Do, END_OF_DOCUMENT_TOKEN_TO_BE_REPLACED
primary teacher/lineage
Teacher Name
Rank Sifu Mak Obtained
Still Affiliated?
Alan Orr
No


Like many people I first became interested in martial arts after watching many of the kung fu films of Bruce Lee and Jackie Chan when I was very young. The first martial art I learnt was Tae Kwon Do, although my training fizzled out once I reached red belt during my time at university. Since then I dabbled in different arts - Five Animals Kung Fu, Shorinji Kempo and Tai Chi Chuan among others - but never really found anything that suited me at the time.

A few years on I developed the urge to take up martial arts in earnest again and had heard lots about Wing Chun from my Dad (he was born and raised in Hong Kong) and from friends and was curious about this simple and direct fighting style. A move to Bournemouth finally prompted me to seek out a Wing Chun Instructor. I wanted to take private lessons as I knew this would encourage a steeper learning curve. I eventually contacted Sifu Mark Smith - an exponent of Augustine Fong lineage Wing Chun. From the first few lessons I was captivated by the art and seemed to have a natural ability - after lots of hard work I developed my skills very quickly. I owe a depth of gratitude to Mark for his diligent teaching, patience, enthusiasm and most of all for his friendship, all of which was given unconditionally - most of the training I received was free of charge - a very rare, kind and generous gesture in this day and age.

Later on in October of 2005, Mark and I took a trip to York, contacting Sifu Alan Orr to arrange a private lesson after hearing lots of exciting news about his teaching methods and the Chu Sau Lei Wing Chun he was practising. We primarily wanted to seek out another system that could show us something new, something that had more to offer, something that our own Wing Chun was missing. Although, having experienced various other schools/lineages of Wing Chun and finding nothing that really stood out when compared to our own abilities, we arrived at Alan's house feeling fairly confident. But we were in for a big surprise. From the first few moments of meeting Sifu Orr we were utterly astounded - the methods, knowledge and ability he demonstrated to us were a revelation - we had finally found the answers we had been looking for in respect of where we were and where we needed to be. I personally came away from that meeting speechless, as it was difficult to get my head around what we had just experienced! Never before had we been so overwhelmed, especially when it came to chi sau, Sifu Orr's power and control was awesome. Alan was very firm but gracious in pointing out the major flaws in our style and revealed how we should work on improving our skills - the vital component we were lacking, of course, was a method for training the use of our body structure correctly.

From that moment I became a student under Sifu Alan, learning the Chu Sau Lei / Ying Hung Wing Chun Family Boxing System, as founded by Grand Master Robert Chu. The structure and teaching of the class in Bournemouth was completely revised, everything was stripped back to basics, and all the old drills were thrown out. The transition was hard work and many students found the drastic change disheartening and unfortunately left the school. Only those few students who showed heart and could see the benefits of the new training methods decided to stay. Their dedication has definitely paid off and they have reached and are continuing to reach much higher levels of skill and mental and physical toughness.

It is my intention to focus on teaching CSL Wing Chun Chinese Boxing to small numbers of dedicated students. I believe this allows me to provide the highest standard of training to bring out the best in my students.