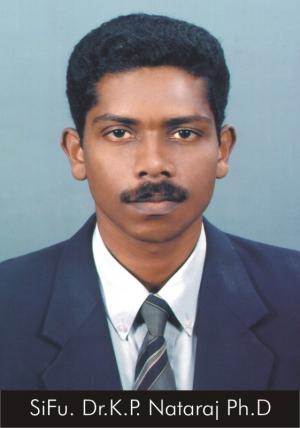 
SiFu: K.P.Nataraj, founder of Yaolan Kungfu School was born in Kallara, Kottayam district of Kerala State, India , Asia . His father was a practitioner of kalary, martial art of kerala. He followed his father’s foot step and started learning kalary at the age of seven in 1975. In 1982 he joined a local karate school and started learning karate. In 1986 he started learning kungfu under SiFu: M.A.Baby. The style was called Mansoorya kungfu. Later SiFu: Baby changed style and taught Chinese kungfu. SiFu: K.P.Nataraj continued with him and took Black sash. The chief instructor of that style was SiFu: M.L.Antony. He was a 3rd degree Black sash.

After Black sash, SiFu: K.P.Nataraj directly trained under SiFu: M.L.Antony and continued training under him up to 2nd degree Black sash.But he was not satisfied with this style. It was a locally made kungfu .For 10 years he trained this style and he was the general secretary of that organization. He was optimistic, so he shifted his attention to Nepal for learning Wushu. During the stay at Nepal he met a master of Hung gar kungfu in the lineage of David Lee. His journey towards Hung gar kungfu began there. During the training, he was informed about Wing Chun kungfu. That was in 1990. He got interested in Wing Chun and started searching to find out a Wing Chun master from china. On the way he came to know about SiFu: Donald Grose. In 1994 SiFu: Don Grose accepted K.P.Nataraj as his first Indian student and started Wing Chun training. In 1996 he appointed K.P.Nataraj as his national representative for India . In 1999 SiFu: K.P.Nataraj brought Don Grose to India and during this trip he was awarded with 7th degree Black sash. SiFu: K.P.Nataraj is no longer a part of SiFu: Don Grose’s organization.

Grand Master: Chan also accepted K.P.Nataraj as his first student in India to assist him to develop a good quality Chinese martial art school in India. Grand Master: Chan is living with his family in U.S.A. SiFu: K.P.Nataraj is an Engineer. He is an Electrical engineering graduate. He has also done post-graduation and Ph.D in martial arts. He is a registered medical practitioner in Alternative Medicine. He is a Reiki Grand Master, Counsellor and Clinical Hypnotherapist. Reiki Grand mastership attunement was given by Dr. Sandeep Khurana. He studied Hypnotism under Sri. Rooshi Kumar Pandya (Mumbai), Dr. Ramaswamy (Chennai), and Dr P.Vinodson (Kerala). He learned Clinical Hypnotherapy and Past Life therapy under Dr. P.Vinodson. He also learned H.R.T. & P.D. Counselling in Psychotherapy. He has 3rd degree Black belt in Karate, 4th Dan Black belt in Kobudo and Diploma holder in Wushu. He attended training program in Escarima under Disceo Canate, Philippine-World Grand Master of Escarima, N.L.P., Magic etc.