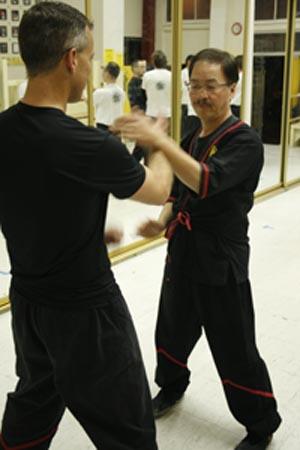 
In 1967 Sifu Elmond Leung began his WingTsun Kung Fu journey in Hong Kong. After searching for a style that would suit him, he selected WingTsun. At that time, the late Great Grandmaster Yip Man had opened a new program to attract younger students to his school on Nathan Road.

In 1982 Sifu Elmond started teaching privately to a handful of students. His students' accomplishments include having won First, Second and Third place rankings in international competitions.

Those who have met Sifu Elmond quickly acknowledge that he has genuine WingTsun knowledge and a master's skill level. Although Sifu Elmond has always been a member of the International WingTsun Association in Hong Kong, he has only recently joined and become active in the North American Section. At last, the later generation students of the Grandmaster meet a first generation student! In the family tradition of WingTsun, Grandmaster Leung Ting now calls upon Sifu Elmond to help teach and train the younger WingTsun brothers and sisters.