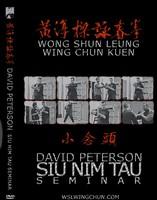 Simply stated the “Siu Nim Tau” DVD by Sifu David Peterson is a painstaking labor of love that is a meticulously thorough, in-depth seminar reviewing the revered late Wong Shun Leung’s Siu Nim Tau. Emphasis on the thoroughness of the seminar cannot be overstated. Sifu Peterson spends well over three hours covering theory, modifications, points, applications and the many ideas behind Siu Nim Tau that Sifu Wong acquired through his vast experience with Biemo. The seminar is actually a set of two DVDs: the first DVD covers the first two sections of the form, while the second DVD finishes out the form and then shows a question and answer session, drills and the form itself without commentary.

After many years of teaching Sifu David Peterson has reached a point at which he has felt comfortable enough to release DVDs which are to cover the late Sifu Wong Shun Leung’s Wing Chun Kuen. Sifu Peterson has been referred to as the blueprint of Wong Shun Leung Wing Chun Kuen; the reference to the blueprint meaning precise and exact. This “Siu Nim Tau” seminar DVD is the first in that series and indeed Sifu Peterson’s skill at instruction comes through with modification of Sifu Wong’s ideas.

The Siu Nim Tau seminar is presented as a two DVD set. Sifu Peterson is actually a teacher and that aspect of his career comes through quite clearly as he presents the seminar with the attention to the minutest detail of the form with an abundance of clarity. To give the reader an idea of the time required to cover such detail the chapter lengths of the DVD are as follows: disk one; section one is 77:52, section two is 47:45; and on disk two section three is 40:20. That total does not include additional material on disk two such as the form itself, questions, and drills which are an additional 5:00, 11:40, 10: 12 respectively. The seminar is well over three hours in total.

The late Sifu Wong Shun Leung had very clear ideas about Wing Chun’s Siu Nim Tau form, which he elaborated to his students. To this end each section of Siu Nim Tau is given an overall concept heading, which are: section 1 - structure, section 2 – recovery, and section 3 - coordination. With this in mind Sifu Peterson then guides the viewer through a highly detailed exploration of the form as he addresses individual movements within the section and relates them to the main idea of each of the sections. This approach gives the viewer a clearer idea of the relevance of the individual movements of the sections of the form.

Sifu Peterson breaks up the form into the traditional three sections, demonstrates the form’s movements, reviews each of the forms individual movements with an eye to exacting detail, illuminates important points of the individual movements, provides ideas and theories from his instructor (this is important as Sifu Peterson makes clear why Sifu Wong practiced and most tellingly taught the form as he did), illustrates each movement of the form with a seminar volunteer, and finally concludes that section by reviewing salient ideas presented in bulleted points. This same structure is carried out until the entire form is covered at which point questions from participants from the seminar are taken and then drill exercises are covered.

Wong Shun Leung Wing Chun is a modification of Grandmaster Yip Man’s Wing Chun. Sifu Peterson clarifies the modifications that Sifu Wong came to realize as a result of Sifu Wong’s Beimo experiences with great and sometimes humorous anecdotes. When viewing the DVD one comes to realize the respect that Sifu Wong had for Wing Chun and in turn passed on to his students. Further, the DVD is strictly Wong Shun Leung without reinterpretation on the part of Sifu Peterson.

In conclusion David Peterson’s Wong Shun Leung’s “Siu Nim Tau” seminar is a well-documented DVD that examines in depth the form as Wong Shun Leung practiced and taught. The DVD is well produced with only a hint of interruption from time to time. The sound quality is great and the production was clearly professional. There are no problems with lighting or sound and as mentioned there are bulleted highlights of the ideas behind each section of the form. This is a DVD well deserving of five stars out of five and one can only guess that Sifu Peterson’s output will continue to improve as he becomes more practiced at issuing DVDs. The only negative thing I would comment on is that the form should have been presented initially before the in-depth examination of the form was presented. This would set the stage for the viewer to have greater appreciation of the genius of Wong Shun Leung. Instead the complete form occurs on disc two, which while still relevant may be a bit confusing for some.

You can purchase this DVD here: http://www.everythingwingchun.com/David-Peterson-Siu-Nim-Tao-Seminar-p/dp02.htm