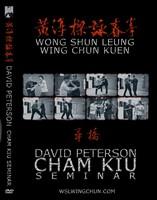 Once again Sifu Peterson, “The Blue Print of Wong Shun Leung Wing Chun” has produced an exceptional DVD video on Cham Kiu (bridge-seeking), the second form of Wing Chun titled “ Cham Kiu Seminar.” This seminar follows Sifu Peterson’s “Siu Nim Tau Seminar” format with the exception that Sifu Peterson shows the form before delving into the specifics of the techniques. Presented on two DVDs the seminar is quite lengthy due to the extraordinary amount of detail that Sifu Peterson covers, along with anecdotes about Wong Shun Leung’s philosophy, experiences garnered from Beimo and discussions with Yip Man, as well as including Wong’s student days, questions, exercises and review. The most important idea from Wong Shun Leung is that Wing Chun is concept based not technique based. There is no “if this then that” instead Sifu Wong viewed Wing Chun as a toolshed with perfect techniques/tools waiting to be utilized. If you have purchased or are thinking about purchasing the book “Look Beyond the Pointing Finger - The Combat Philosophy of Wong Shun Leung,” also by David Peterson and now in its second edition, this DVD is the perfect compliment. The philosophies discussed in the book are present in every part of the form and the actual execution of the form. In fact one might say that the David Peterson DVDs are an extension of the book.

Cham Kiu differs from Sil Nim Tau in that there is stepping, pivoting, directional change, techniques specific to Chi Sau (the genius of Wing Chun) as well as the first in a series of kicks within the Wing Chun system and of course the idea of hitting a moving target. Within the Sifu Wong’s Cham Kiu form many ideas are presented such as: creating the bridge, borrowing force, using the elbow to find the center line, always facing the opponent, Soh Sau and of course recovery – since no one is perfect. These are but a few examples of the important points that are cleverly elaborated by Sifu Peterson.

Wong Shun Leung distilled Wing Chun concepts and practices both as student and by lengthy discussions with from Yip Man, as well as Sifu Wong’s numerous Beimo (challenge fights) matches. Grandmaster Yip Man encouraged his students to try out their skills outside of the classroom. Wong Shun Leung did exactly that by putting his learning and skills to immediate testing. Practicality of Wing Chun techniques in the Beimo matches prompted Sifu Wong to modify Wing Chun and to develop a set of philosophies that build on Grandmaster Yip Man’s teachings. It should be stressed that Wong Shun Leung was one of a handful of students who learned the entire system of Wing Chun directly from Yip Man. This cannot be said for all of Yip Man’s students. It should also be mentioned that Wong Shun Leung was known as “King of Talking with the Hands” as he never lost a challenge fight regardless of his opponent’s martial art. Following the logic of Wong Shun Leung, Sifu Peterson breaks down the Cham Kiu form into the traditional three sections and presents ideas behind the techniques of each section within the form by both discussion and demonstration. Sifu Wong likened Wing Chun to a toolshed of perfect tools waiting to be utilized, but in not any particular order. Sifu Peterson also states that the form presents ideas that are useful in Chi Sau. Of course Grandmaster Yip Man regarded Chi Sau as the “genius of Wing Chun.”

Wong Shun Leung concepts and modifications presented by Sifu Peterson can sometimes be as subtle as the turn of the wrist with Lan Sau or quite evident such as the Waan Geurk or side kick near the last of the form. Whenever a technique or modification has been added to the form by Wong Shun Leung Sifu Peterson explains the precise reasoning behind that particular modification – nothing is left to the imagination of the viewer. Sifu Peterson is quite thoroughly complete in his explanations of the concepts presented on the DVD. Most insightful are the numerous anecdotes that Sifu Peterson relates to the viewer that give the viewer an inside perspective of Wong Shun Leung’s experiences, ideas, reasoning, and even his early training days with other students of Yip Man.

The DVD is presented in the nearly the same format as the first seminar, “Siu Nim Tau Seminar”, on two DVDs, with the exception that the Cham Kiu form is presented in its entirety at the very beginning of the seminar. Additionally, each section’s important ideas is highlighted before the section is presented, while all sections are again highlighted at the end of the presentation of the section with important points of that section to instill the essential points of that section to the viewer. This serves the viewer as reminder of the most pertinent points behind the specific section of the form, which Sifu Wong wanted to impart to his students. The seminar timings are: disk 1: 59:20 (section one), 40:30 (section two), 21:44 s(section three); and disk 2: 3:41 (form), 11:20 (questions), 33:10 (drills).

To further the viewer’s education and demonstrate the effectiveness of Wong Shun Leung’s Wing Chun Sifu Peterson works with a seminar participant on each of the techniques. It is here that Sifu Peterson shows the Wong Shun Leung way. Again each concept is explained with great detail. Sifu Peterson does not pick participants out of favor, but works with a variety of body types to emphasize the effectiveness and the genius that is behind Wong Shun Leung Wing Chun. Perhaps more telling is when Sifu Peterson demonstrates what happens when he does not use Sifu Wong’s methods and ideas whether this be the loss of balance, being uprooted, or chasing hands rather than center to name but a few examples. In summary, Sifu Peterson has done an outstanding job of presenting Wong Shun Leung’s Wing Chun. Sifu Peterson does this by minutely examining the form, the ideas and following these up with demonstrations all the while highlighting the important points that Wong Shun Leung gleaned from his experiences on the streets of Hong Kong as well as his detailed discussions with Grandmaster Yip Man. This is truly a DVD that should be in the media library of any Wing Chun practitioner or potential student. Finally, the idea that Wing Chun is concept based rather than technique based is presented repeatedly the viewer. This was central to Sifu Wong’s Wing Chun ideology, and his mastery of Wing Chun as arguably its finest proponent in Hong Kong. The DVD is most highly recommended.