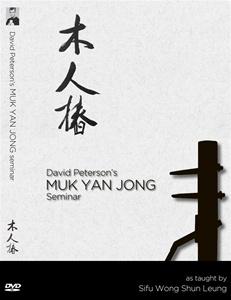 David Peterson’s “Mook Yan Jong (MYJ)” is a truly phenomenal DVD that takes the neophyte, student, or seasoned Wing Chung practitioner through the Mook Yan Jong form of Wing Chun as practiced by the “King of Talking with the Hands” Wong Shun Leung. The late Sifu Wong modified the MYJ form as taught by Grandmaster Yip Man due to Wong’s numerous challenge fights and conversations with his Sifu Yip Man. This DVD is a meticulous 208 minute study into the minutest detail of the Wong Shun Leung Mook Yan Jong form. The coverage details the form, presents the MYJ form from multiple angles for clear visualization of the form; shows examples of the applications, and elaborates on the insight that the late Sifu Wong Shun Leung gleaned from his numerous challenge fights. This is truly one of the definitive DVDs presented on the Wong Shun Leung lineage of the Mook Yan Jong form.

David Peterson’s “Mook Yan Jong” DVD seminar can be summarized, as he puts it, in one word – recovery. It is well known that Sifu Wong Shun Leung modified the Mook Yan Jong form as he learned the form from Yip Man. The late Sifu Wong both added and removed techniques as he put his knowledge to the test in his numerous Beimo contests. The form as shown on the DVD is many techniques longer than Yip Man’s and does differ in the presentation of the techniques.

In Sifu Wong Shun Leung Mook Yan Jong the number of techniques is not important, and the sequence of the techniques is not important. What is important is that the techniques be practiced at some point during the form. Also evident as stated by Sifu Peterson is that there are many shades of gray to the specifics of the form. The Mook Yan Jong from should not be looked at as absolute with regard to the position of the arms and, rather these are representations of arms and legs that will vary as the practitioner works through the form. Also, at some points within the from Sifu Peterson shows what had been left out as one goes from technique to technique. This is most evident when Sifu Peterson shows the wrong Bong Sau.

Sifu Peterson also points out that the late Sifu Wong stressed that one should not stick to the dummy’s arms, which is quite different when compared to Yip Man Mook Yan Jong. Sifu Peterson is careful to point out that Sifu Wong readily acknowledged that he changed when the student was introduced to the Mook Yan Jong and that he, Sifu Wong modified, as he instructed his students. Indeed when asked by Grandmaster Yip Man why Sifu Wong modified the form Sifu Wong explained his reasoning behind the modifications directly to Yip Man. However it should not be construed that Wong Shun Lueng Mook Yan Jong diverges from Yip Man, Wing Chun, but rather approaches the original form with the knowledge gained from the challenge fights.

To Sifu Wong Shun Leung the wooden dummy was a practice in techniques to be applied when something when a little wrong, recovery, with a response to or execution of a technique compared to the first two forms of Wing Chun when execution goes rather well and Biu Jee when something has gone quite wrong. Indeed as one presses further into the DVD this idea of recovery emerges quite plainly. At each point Sifu Peterson executes the techniques with various students and again when necessary at different viewpoints to further stress this idea of recovery.

This is the third installment in the Sifu David Peterson Wong Shun Leung Wing series. The DVD is over 3 hours in length. One little note this DVD seminar differs from the others in the series as the entire seminar is contained on one DVD. It would have been nice to see a bit more practice drills and question and answers sessions. Once again I give highest recommendations for Sifu David Peterson’s Mook Yan Jong DVD seminar, which any, with emphasis on any, student, Sifu, or practitioner will find useful.