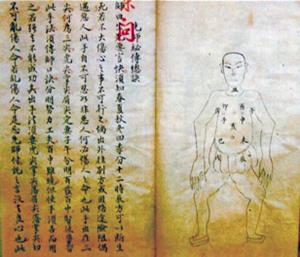 Leung Jan (Liang Zan), originally named Leung Dak Wing (Liang Derong), was born between 1816–1826 (End of the Chia Ching period of the Ching Dynasty 1796–1820), though accounts vary on the exact date. Leung Jan’s father was a herbal Doctor and ran a pharmacy on Fai Jee Street. Leung Jan was the youngest of two sons, born to Dr.Leung. The eldest son, Leung Dak Nam became a buisinessman. While the youner Leung Dak Wing followed in his fathers footsteps, with his love of medical knowledge. Leung Dak Wing took over the family pharmacy (known as either Jan Sang Tong, Wing Sang Tong, Hang Lam Tong, Yan Sang Tong or Hang Chai Tong in different accounts) on Fai Jee Street, after his father passed away, in the mid 1850′s. Because of his occupation (in some accounts because of the name of his Pharmacy) he came to be called Jan Sin Sang (Zan Xiansheng, Mr. Jan) or more simply rendered, Jan Sang (Zan Sheng) by the locals.

Leung Jan began learning Wing Chun Kuen during the 1840s from members of the King Fa Wui Goon Opera Troupe.It is commonly believed that Leung Jan started learning under Mo Deng performer(Male Dressed as Female)/Poler Leung Yee Tai and apprentised on the Red Boats from the period of the 1840′s- 1850′s, until Leung Jan’s father passed away, where Jan returned to run his fathers Pharmacy. It is than believed that during the Opera ban post 1855, that Leung Yee Tai and Wong Wah Bo lived in the surrounding area of Foshan. At this time Leung Jan continued his studies, and in some oral traditions at this time Jan along side his second teacher Wong Wah Bo, created the three hand forms which are the main vehicle for transmission of the Wing Chun Kuen system.

There is an account passed down in the Yip Man Family by Yip Ching , that suggest Leung Jan exchanged Look Dim Boon Gwun Methods with Fung Siu Ching at a local smoke-house, in Foshan.

Leung Jan won the title “Wing Chun Kuen Wong” or The Fighting King of Wing Chun Fist. This was earned over the cource of 300 challenges, in which he went undefeated. He was also the first to beat a wide range of styles using the Wing chun Fist methods.

As is the case for all of the mid 1800′s - early 1900′s Wing Chun Kuen ancestors, many diffearant and contradictory accounts exist.The name of Leung Jans Pharmacy, has been the source of dispute for a long time amongst Wing Chun Masters. It has been said the name was known as either Jan Sang Tong, Wing Sang Tong, Hang Lam Tong, Yan Sang Tong or Hang Chai Tong in different various traditions. Fung Chun, one of the eldest living members of the Wing Chun Clan, as of 2007, and one of the last true 4th generation masters, states very clearlly the name of Leung Jan’s Pharmacy should properly be Hang Chai Tong. Hang= Apricot; Chai= To save or help; Tong= Hall. He states that the meaning is that Leung Jan named his Pharmacy after Wu Tung Feng in the 3 periods kingdom (220–265 A.D), who healed hundreds of thousand poor and sick, for free, in an apricot forest, that he lived in.

The most varied information,though isnt the name of Leung Jans Pharmacy. But of how many children he had. Most versions state that Leung Jan had two sons named, Leung Bik and Leung Chun. Some variations state Leung Chun was Infirm and died at a young age. Other accounts suggested he had a third son named Leung Suen. The current research by the AWCKRI suggests that Leung Jan actually only had one son, named Leung Chun. He was infirm and passed away at a very young age. This is substantiated by the fact, that when Leung Jan retired back to Kulo Village, he sold the family buisiness, which in tradition Chinese Culture, would have naturaly been passed down to his son(s).

It has been said by recent visits to Kulo Village by members of the AWCKRI, that Fung Chun admitedly thought Leung Ting, was going to try and make money off of what he learned during his visit, to Kulo Village. So Old Fung Chun, had some fun with him.

In 1885, At the age of 73, Leung Jan retired back to his native village of Kulo, Heshan county, where he taught the Wing Chun System to a few local students, such as Wong Sum Wah, Leung Bak Cheung, and Yik Ying. Again in some accounts it is said that Yim Sei also learned.It is important to note that, Fung Keung, son of Fung Chun, supports the fact that there was only three students that learned from Leung Jan during this period of teaching in Kulo village, before passing away at the age of 76.

The system he passed on at his time, differed from what he taught in Foshan. In Kulo Village he taught a very compact San Sik method. Some suggest this was his final synthisis of the Wing chun system. But modern research by the AWCKRI suggest that the san sik method, was part of the original teachings of the Wing Chun Kuen system, and was what Leung Jan learned, on the Red Boats, from Leung Yee Tai.

Leung Jan’s popularity never really faded as he was still a hero to the people well up into the 20th century, with many Pulp novels relating his adventures. In modern times, the film screen as been graced by various incarnations of Leung Jan, including the movies,” Prodigal Son”, “Decendent of Wing Chun” and “Warriors 2″.

Side Note: There are differing explinations for the change in Leung Jan’s name. In one, he chose the name Jan, thinking it sounded more professional for an osteopath. In another, the hand-written sign for ‘Wing’ on his shop was so often misread as ‘Jan’ that he eventually began to answer to that name.