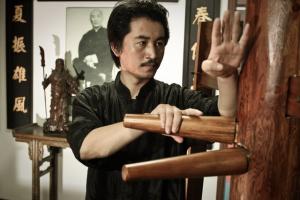 
Master Wang Zhi Peng Born on the boundless grasslands of Inner Mongolia, where he studied martial arts from famous masters since his childhood. He has studied Shaolin Kung Fu, Sanda, Taiquandao (Tae Kwon Do), Yi Quan (Dacheng Quan), and other true combat forms of kung fu.In the early 90's he took as his master Mr. Li Heng Chang, an outstanding student of Wong Shun Leung, chairman of the Wing Chun Athletic Association in Hong Kong and a contemporary of Bruce Lee. He has studied Wing Chun up to the present day. Master Wang has served as a coach at the Yan'an School of Martial Arts, the president of the Wing Chun Society of Xi'an, and the head coach of the Xi'an Wing Chun Training Center. During his time as a teacher, he has accompanied students to many competitions in various disciplines, receiving excellent results. His accomplishments have been the subject of many special television reports on sports channels in Shaanxi, Beijing and all over China. Master Wang moved to Beijing in 2000 to set up base and worked as the personal bodyguard of Wu Yinqiang, the chairman of the board at Shengdiwei Jewelry Co., Ltd. In 2002 he was invited to perform for and teach Wing Chun to the troops of the Hainan Province Military Police. In 2003 he was invited by a scout battalion of the People's Liberation Army to give instruction on Wing Chun methods. From 2004 to the present he has been the technical consultant to www.kungfuland.com. In May of 2006, he was invited to teach at Cambridge Tae Kwon Do in England. On May 2, 2007 he accompanied students to compete in the Mixed Martial Arts Tournament of China, where one of his students won a championship and another won a second-place finish in separate events. On July 25 of that year, National Geographic came to China to film for their Kung Fu series, which featured Wang Zhi Peng and Wing Chun students atop the Great Wall of China and further elevated awareness of Wing Chun in the West in a series called ‘Human Weapon’. At the end of 2008, Master. Wang collaborated with a domestic film company, serving as the kung fu director for the martial arts film IpMan.He is currently the general manager and head coach of Beijing Institute of Ving Tsun Cultural Development. In 2009 Master Wang accompanied top disciple and 2nd coach of Beijing Ving Tusn, Jai Harman to the UK for a masterclass on the workings of Wong Shun Leung Ving Tsun. During this time they took time to stop by many of the WSL family schools and also did workshops for Sifus who wanted to better their knowledge. Alan Gibson of Southampton WSL Ving Tsun was a pivotal piece in the puzzle helping with organizing the events and will continue to work with Beijing VingTsun in future events and seminars. Beijing VingTsun was invited to The Chinese Police Academy in Da Xing to conduct seminars and demonstrations in 2010 where based on the performance and vigor of the Beijing VingTsun team, the Chief of Police at the Chinese Police Academy made the decision to carry on studying the Chinese Kung Fu art of Ving Tsun over the foreign watered down arts of ITF Tae Kwon Do and Aikido. Also in 2010 Beijing Ving Tsun were asked to coordinate on the 2nd Ip Man movie and also were in charge of the sound effects for the wooden dummy, fight scenes and general kung fu knockings about during the film. <<<<>>>>>>