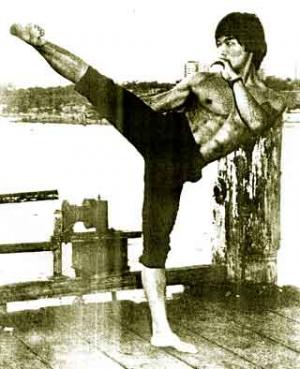 
Nung accepted Sifu Wong as a student at the age of 12. He became very impressed by Wong's photographic memory and ability to repeat his demonstrations with ease.

After training many years in China, Sifu Wong later came to the U.S. to meet his grandfather Wong Wing, who was remembered by many as Long Wing (meaning Tall Wing) and was elected as a Chinese community leader in the old Chinatown of Los Angeles and San Francisco areas in the 1940's and 1950's. In the U.S., Sifu Wong trained over 1,000 students during his college years. Due to his extensive traveling, he often had to abandon his teaching. However, some of Sifu Wong's students are teaching Wing Chun today and some first level instructors have taught more than a hundred students.

Naturally everyone was curious about Wong's fighting skill with his Wing Chun. Jerry Poteet and others said, " feeling is believing..." and challenged Wong, so Wong demonstrated his inch power forwards and backwards! A quick one handed lap sau on Poteet lifted the hair off his head as he flew past Wong. Sifu Wong barely moved an inch. Later Wong became friends with these guys and they all respect his kung fu, speed, power and applications. The one inch punch and lap sao are not the least of them all. Boxers Like Lee Smith, a multiple Golden Glove champ, and kickboxing champs, wrestling Champ Kirk Gloss all who will attest to Sifu wong's incredible speed and short explosive power. It was his favorite thing to tell people, "I'm gonna hit you right there and you won't be able to stop it". I've personally experienced him use that on me and seen him do it to other people repeatedly.