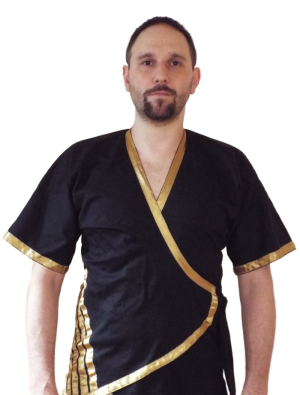 The chief instructor of the Five Elements Wing Tsun Kung Fu Association SiFu Róbert Török Born on the 18th of December of 1978 in Debrecen, Hungary, first he started to learn the martial art of karate, but switched to Wing Tsun already at the age of 17 in 1996, when he became a student of the Hungarian Wing Tsun Organization. It took him five years to acquire all the student grades. Out of the five he spent three years as the deputy instructor of his Sifu. Also during this period he worked as the master’s assistant when he was teaching in military training camps, since Sifu Török spent seven years as a soldier in the Hungarian army. During the war in the Balkans he spent half year in Kosovo. There he was asked by his commanding officer to form and teach his own group of Wing Tsun students. The group was composed of soldiers from the rank of private to lieutenant colonel. During his studies of Wing Tsun he participated in numerous seminars, including regional seminars, summer camps, seminars held by grandmaster Leung Ting, and special seminars (Biu Jee, long pole, knife fighting, chi kung, chi gerk). In October of 2001 he successfully took his first grade master exam in front of Grandmaster Leung Ting. This was also the time when he opened his first kung fu school at the University of Debrecen. In the fall of 2003 he successfully completed his exam for the second master grade, in September he opened his second school in Nyíregyháza and consequently was appointed chief instructor of Szablocs-Szatmár-Bereg County. In 2004 Sifu Norbert Máday accepted him to be his private student. In this period he started to take a more active role in teaching Wing Tsun abroad. In September 2004 he opened his third school in Oradea (Nagyvárad), in Transylvania, Romania. In the next couple years he trained military and special forces not just in Hungary, but also, for example, in Latvia and Lithuania. He acquired his third master grade in October 2005. In 2007 he took his fourth master grade exam in front of grandmasters Cheng Chuen Fun and Leung Koon. On February 12, 2011 in Nyíregyháza he successfully completed his fifth master exam, thereby becoming one of the five highest ranking instructors of the Hungarian Wing Tsun Association. In June 2012 he became the chief instructor of the Five Elements Wing Tsun Kung Fu Association, founded by numerous instructors of Wing Tsun. In the spring of 2013 accompanied by Sifu József Bányász and Sifu Tamás Barta, he visited one of the most knowledgable Chinese masters of Wing Tsun, Sifu Carson Lau in Toronto, Canada. Sifu Lau even held private lessons for Sifu Török. In June 2014 the Five Elements Wing Tsun Association and the Carson Lau Wing Tsun Academy became partners, and the Association became the affiliated branch of the Academy, which also meant that Sifu Lau offered Sifu Török the chance the learn the most advanced techniques of Wing Tsun. During the years of the association, SiFu Carson also successfully took over the missing part of the Wing Tsun system from Grandmaster Lau, thus mastering the entire system of Wing Tsun Kung Fu. At the grandmaster seminar held in 2016, SiFu received his master’s degree from Carson Lau, achieving the highest degree of our association.