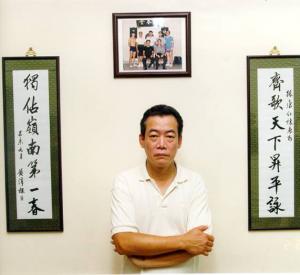 It was during the late 1950's that Sifu NG Chun-hong was first exposed to the Kung Fu style of Wing Chun.  As a boy growing up in Hong Kong's notorious Mong Kok district, he would witness several END_OF_DOCUMENT_TOKEN_TO_BE_REPLACED
primary teacher/lineage
Teacher Name
Rank Sifu Ng Obtained
Still Affiliated?
Wong Shun Leung 黃淳樑
3. Master of the System (As taught by teacher (Full Sifu))
No


It was during the late 1950's that Sifu NG Chun-hong was first exposed to the Kung Fu style of Wing Chun.  As a boy growing up in Hong Kong's notorious Mong Kok district, he would witness several altercations in and around the Matheson Playground.

On one occasion in particular, he would observe a slightly older youth defend himself against several opponents.  Impressed by the older boy's martial prowess, NG Chun-hong inquired as to this older boy's name, what style of fighting he used, and as to whom his teacher was?  The older boy's name was Guy LAI Ying-jau (later becoming the Wing Chun Kungfu consultant for the film 'The Prodigal Son'), his style of fighting was Wing Chun, and his master was the renowned JIU Wan ..........

So in 1960 NG Chun-hong began studying Wing Chun under JIU Wan.  Contemporary students with him included HAU Wing-jan, LEE Fat-cheun, FUNG Sze-yuen, FUNG Sze-chai, YIM Chung-kit, LI Hoi-sang, CHAN Yuen and KWOK Ying-wah.  After spending a number of years under his guidance, NG Chun-hong had to suspend his training, because of joining the then Royal Hong Kong Police Force.

With his Police training complete, NG Chun-hong decided to return to studying Wing Chun.  This time he would study under the acclaimed Master LOK Yiu.  Other students training at this time included LOK King-kong, LOK King-keung, LI Kwai-yiu, CHEUNG Kwong and LAM Hong.  Once again, after spending a number of years with LOK Yiu, NG Chun-hong had to suspend his training for a short period due to working commitments with the Police Force.

Once his working environment became more stable, NG Chun-hong continued his Wing Chun studies, this time he would follow the legendary Master WONG Shun-leung.  It was due to NG Chun-hong's superior at the Police Force, a chief detective named TANG Sang who would recommend WONG Shun-leung as his Sifu (TANG Sang was also senior within the Wing Chun family being chairman of the Wing Chun Athletic Association at that time).  Other contemporary students of WONG Shun-leung included Gary LAM Man-hok, YUEN Yim-keung, WAN Kam-leung, CHUI Hok-yin, Nino Bernado and Barry Lee.  The years passed, and in 1978 NG Chun-hong was authorised and certified by WONG Shun-leung to teach.  A little later that same year, Sifu Ng opened his school and began accepting students but by introduction only due to the nature of his profession.