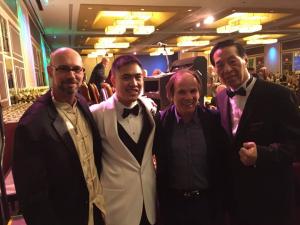 Born May 26, 1976, the Year of the Fire Dragon. His family introduced Michael Chin to Kung Fu at an early age of 5 years old. He would watch old Chinese movies which included Kung Fu. A friend of the END_OF_DOCUMENT_TOKEN_TO_BE_REPLACED
primary teacher/lineage
Teacher Name
Rank Sifu Chin Obtained
Still Affiliated?
Samuel Kwok
3. Master of the System (As taught by teacher (Full Sifu))
Yes

Born May 26, 1976, the Year of the Fire Dragon. His family introduced Michael Chin to Kung Fu at an early age of 5 years old. He would watch old Chinese movies which included Kung Fu. A friend of the family restaurant that worked at Joy Inn Restaurant began showing him techniques after his shift. Michael would then practice Hung Gar Kung Fu at the Dallas Chinese Cultural Center under Phillip Ng near his home up until high school years. As he grew older he was inspired, influenced by Bruce Lee. He would watch his movies endlessly and tirelessly. During his teens and college years he trained in researched various styles such as Jeet Kune Do, Thai boxing, and Filipino martial arts such as Kali, Silat and Brazilian Jiu Jutsu. At the University of Arlington, he would reunited with a friend that would introduce him to the famed Pat Burleson of Texas Blood and Guts and would attend classes together. At the college he trained in Tae Kwon Do under Michael Johnson and also took up a class in Fencing. In 1997-2000, he trained in American Kenpo under Rick Fowler; later switching to Tim Bulot. In 2006 and 2008 he had intermittent attendance (of a few months in and out) under Raymond Crow, training in Wing Chun and Jeet Kune Do. His true love and interest was always to train in Wing Chun due to his aspirations with Bruce Lee. However, while seeking for a SiFu, he noticed some Sifu's in the Texas area trained differently; some more different than others based on his studies and research. He read books and watched videos attempting to learn on his own until he can find a proper SiFu. In 2009/2010, he trained with a backyard/park group with various mix of Wing Chun lineages. It wasn't until 2011, he attended the Legends of Kung Fu tournament sponsored by Chin Woo organization. After having a conversation after the tournament in regards to searching for a Wing Chun SiFu, he mentioned to check out Grandmaster Samuel Kwok's website. After doing his own research and discovering that Grandmaster Samuel Kwok was taught by the Ip family himself and various others of Ip Man's main students, a true link to the Ip Man lineage, he decided to take a leap of faith. He joined the Samuel Kwok Wing Chun Martial Arts Organization and decided to take Grandmaster Kwok's Distance Learning Course in October/November 2011. He kept in touch with SiFu by phone and email, followed his Distance Learning program, books and DVDs every month to keep in touch with his progress. In April 2012 and 2013, Michael flew to Portugal to join Grandmaster Samuel Kwok and many of his high-ranking students and SiFu's for the Portugal Seminar. Meeting and seeing SiFu in person, and his newly found Brothers and Sisters for the first time, he made the best decision of his life joining SKWCMAA and training in authentic Ip Man Wing Chun. He has since joined in brothers and sisters in other seminars along the way. During these years he taught a small group of students privately at his own home in Little Elm/Aubrey, Texas in Denton County up until 2017/2018. In January 2017 he was inducted into the Action Martial Arts Magazine Hall of Honors. During a period of the last few years, he has taken a hiatus from the martial arts scene due to personal mental and physical issues in his life that set him apart. He now returns to the scene to the art that he loves, Ip Man Wing Chun Kung Fu and will be training Yin Style Baguazhang for longevity, health, and combat benefits.