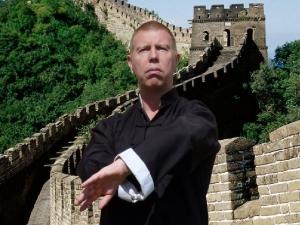 My marital arts journey started way back in 1971 at the age of 7 when my Father had the job of baby sitting BUT had an Aikido class to teach at the same, so off we went to Thornaby pavilion, what bett END_OF_DOCUMENT_TOKEN_TO_BE_REPLACED
primary teacher/lineage
Teacher Name
Rank Sifu Beardsell Obtained
Still Affiliated?
Samuel Kwok
3. Master of the System (As taught by teacher (Full Sifu))
Yes

My marital arts journey started way back in 1971 at the age of 7 when my Father had the job of baby sitting BUT had an Aikido class to teach at the same, so off we went to Thornaby pavilion, what better way to keep an eye on the kids and teach a class, I am sure at that time my Father never even thought that I would get hooked on the subject. So from the age of seven I began learning Aikido, there was always a selection of Judo, Aikido and Karate books lying around the house that I would always pick up and have a read and try out various techniques, I never did really learn the whole Aikido system, but learned enough about the subject to kick arse at school and can only remember coming close to getting beat a couple of times, Aikido gave me an edge. Around the age of eighteen I went off to learn Karate under a guy called Bernard Creton at Folkestone sport centre, he was teaching his own style at the time called Jutsu Kai, i only lasted about 6 months at the class and I never graded but was told I was ready for my blue belt, I continued to practice the kicks at home and at my Father’s Aikido dojo as having one hand I thought the kicks would give me an advantage, I still practice those kicks today, thanks Hanshi Bernard Creton 8th Dan, the following year, lead by my Father, we started attending a Judo school, there was a class around the corner and one in the next town of Hawkinge on a Sunday so I spent sometime doing this and gained a yellow belt. I never did much of anything else over the next 20 years, but kept my skills going, and then I decided to examine my martial arts roots, which led me to my Father’s Aikido teacher in Malaysia who taught him in 1958, Sensei Thamby Rajah 10th Dan, I learned he was still alive and both me and my Father took a trip over to Malaysia and spent two weeks there learning Aikido with the masters and Thamby Rajah Sensei at a Gasshuku in 2006, also making a number of friends along the way. By this time I had also started studying Wing Chun and had been for around a year. There were no Wing Chun schools where I live so I turned to the internet, and tried a few distance learning courses but they did not really amount to anything, I really wanted to grow and get it right then I took a chance on Sifu Phil Bradley’s distance learning course and just got better and better, his course really does work, but of course I could not do any chi sau as I was the only person in my area doing Wing Chun. So with his support and at this time completing the course to the level of Siu Nim Tau I opened my doors to students to give me a chance to make my Wing Chun better. AWCA 2008 summer camp in Phoenix, Arizona while with the Arizona Wing Chun Association, I attended their training events in Chicago, Arizona and North Carolina, and in late 2008 being with the AWCA for 2 years I wanted to learn the dummy form but the AWCA have a strict progressive policy so I looked towards more traditional styles and found that Sifu Sam Chan in Michigan, he had a certification program so after re-certifying my Siu Lim Tau and Chum Kiu I set about learning his dummy form, then, in April of 2009 while attending a 10 day training camp with Grandmaster Samuel Kwok, I decided to follow his example and pass on Ip Man Traditional Wing Chun, and in August 2009 I became a formal student of Grandmaster Samuel Kwok and my journey begins. As a disciple I was given a name that best suits me and that name was Kwok Chung Yin, Yin means good to/with people.

Sifu Mark! He is a very good teacher and devoted to the martial art of Wing Chun. I have been training since 1989 and I have met many Sifu on my way. It is accurate and puts no emphasis on money.