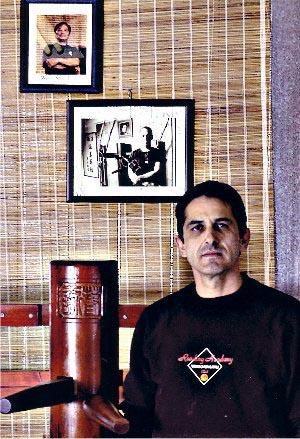 
Lucas Castrounis was born in Athens, Greece in a good family environment. His father, George Castrounis, was a well known Master Violin player and this influenced Lucas to study the piano. But unfortunately Lucas' father died when he was only 10 years old. He was forced to grow up without much family support and began to cope with day to day survival. Lucas' younger years were spent enjoying sports such as swimming and football (he was goalkeeper) and with much dedication he continued his musical and general education before he began studying Hotel Management and Catering. Afterwards he started working in hotels, bars and discotheques in Greece. Lucas is married to Jenny & has 3 children (Maria, George and Pauline) and 3 grandchildren (Emily , James-Lucas & Jake).

As Lucas was growing up the Bruce Lee explosion began to happen in Greece. Although he thoroughly enjoyed the films, Lucas viewed the fighting scenes as untrue and simply as a good form of entertainment. However, Kung Fu was not popular in Greece at the time and the closest thing on offer was Karate. The way Lucas saw this Karate was that it had a greater focus on sport and belt grading, etc., and this was not really what he was looking for.

In Japan it can take up to 15 years of daily training before you become a black belt in Karate. Here with just 5 years training and two relatively easy lessons a week a black belt could be achieved. Through his interest in martial arts and boxing he discovered the beauty of fighting arts but following visits to boxing clubs to see what they could offer, he decided not to join up. Why? Well, as he puts it, why pay to have someone break your nose and teach you to get hit when you could go on the streets and get it done for free! As a person Lucas has a disbelieving nature so it took some time before he believed what martial arts (and eventually Wing Chun) could offer.

Lucas was still fascinated by boxing and martial arts and the way they could be used to look after oneself. He started training in a martial art called 'complete' Wing Chun, but through reading books and analysing what he was taught he felt something was missing.

At the age of 19 he was drafted into the Greek army between November 1976 - June 1979 (30 months) as a personal driver and bodyguard to a Greek Colonel. After leaving the army Lucas spent most of his time with his family, working and training. In his late twenties in 1986 he came to England for fun and began working in pubs and disco/clubs and continued his career in the entertainment industry as a General Manager. In order to survive and to support his family during the 1990's recession in the UK he also started working as a doorman.

While working in the UK, Lucas continued his search for a good Wing Chun Kung Fu school and counts himself very lucky to have had the chance to attend a Nino Bernardo seminar being held at the time at the legendary Basement in London. Through this one seminar Lucas believed he had found the truth behind Wing Chun that he had been searching for. Lucas then began as a private student of Nino's for the first for 2 years and afterwards he continued progressing in his Wing Chun and Kali studies at the Basement in London, under the supervision of Nino Bernardo and his senior students.

The Basement closed its doors in September 2000. Before Nino moved for good to Ibiza, Spain, Lucas was given a personal letter by his teacher, signed as a friend and as teacher, to thank him for his time at the Basement and for what Lucas and his students have done for Wing Chun.

Nino taught Lucas that by learning to control one's ego, anger and pride in Wing Chun, the same attributes could be applied to improve one's everyday life.

Nino Bernardo and Wing Chun were to make Lucas realise that you have to understand yourself; then you can understand and help your friends, family, children and students to also discover the truth and not to force but wait. Wing Chun does not teach you knowledge, it teaches you to learn and discover one-self from your own feelings and emotions. Wing Chun makes you think faster, re-act faster. You need to practise it regularly. It is not just because you read, see or are told something that you know it. Wing Chun also can help you in your every day life. It is more than a system of fighting; it is also a system of thought.

Enjoy the journey in Wing Chun Kung Fu or Kali and it might change your life.