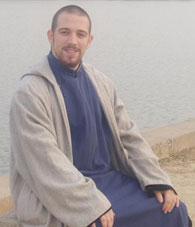 
Founder and head teacher of Jing Xin Yuan, Lin Aiwei, Shifu, has over 20yrs of study and practice in Buddhist / Daoist meditation and Qi Gong. He has over 11yrs training in Wing Chun Gong Fu and Taiji Quan, and is a Disciple under Shifu Alan Goldberg. He learned his Taiji Quan from Shifu Rudy Curry Jr. and 8 Mother Palms of Yin Style Bagua Zhang from Shifu Novel Bell (a.k.a. Black Taoist).

Lin lived in China for several years teaching English and leading a branch of his teacher's Wing Chun Gong Fu in both Taian and Jinan cities in Shandong Province, China PRCunder the founding of Jing Xin Yuan in the middle of 2006.

While in China, he became a Lay Disciple of the Buddha Dharma through Master Xuan Hua's guidance and teachings, and became a lay Disciple under Liu Shifu of Wang Mu Chi Daoist Nunnery of the Hua Shan Sect of Quan Zhen Daoism (Complete Reality Sect of Daoism) in Taian City Shandong China. Liu Shifu is located at the foot of Tai Mountain (Tai Shan) in Hu Shan Gong Yuan (Tiger Mountain Park), and she emphasized Buddhist teachings within the Daoist cultivation methods.

Lin Shifu was born in Brooklyn NY, to the name Erik Oliva. Father was from Italy and immigrated to America, and his mother born in Brooklyn NY, Puerto Rican and American Indian. Lin was fortunate enough to meet cultivation at the young age of 8 years old by his sister.

As a young child he learned various Daoist cultivation practices of sitting, lying, walking and standing meditation, transference of energy practices called "Fa Gong" as well as Shen Gong, not spirit possession based practices but intuitive cultivation. In his late teens, early 20s, he received Buddhist Pure Land and Chan teachings which thrust his Daoist cultivation to a higher level. At that point he realized both Buddhist and Daoist cultivation are truthfully no different except for one thing, one's intention of cultivation. By the time he was 21, he received Daoist practices such as Yi Jin Jing, various methods of Zhan Zhuang (Standing practices), Taiji Quan and Wu Dang Sword.

Between the years 2003 and 2005, Lin wrote a manuscript on cultivation called "Shen Yi Zhi Dao", "The Way of Spiritual Intention". It is comprised of 3 chapters with each chapter consisting of over 40 sub-chapter-like paragraphs covering everything from energetic cultivation to mental, emotional and societal problems as well as solutions to these conditions.

Lin Shifu teaches all of the classes of Buddhist and Daoist cultivation at Jing Xin Yuan, as well as all classes of Taiji Quan and Wing Chun. He treats patients at Jing Xin Yuan's Traditional Chinese Medicine and Massage Clinic offering treatments of Tui Na and Acupressure, Qigong Therapy and Massage Therapy.