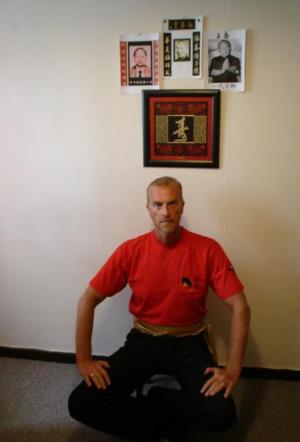 I am a student of Sifu Henk Roelofsen. but when My teacher stopt, Sifu Wang Kiu adopted me as his direct student. i have also my sifu diploma to certify this , that i am know his student.


The lineage he started in the mid 70’s was Yip Man (Chinese)—Wang Kiu (Chinese)—Henk Roelofsen (Indonesian/Chinese). Yip Man started his teachings openly in the 50’s. At first the author enjoyed occasionly some seminars from Master Wang Kiu.

Later in life, the relationship with GM Wang Kiu became more personal. I relate to 15 years of participating his seminars. The last 6-7 years he enjoyed a very personal and intens relationship as a friend but also in his teachings, what completed the whole education of Wing Chun. He enjoyed this very much since I was without my first teacher (who stopped teaching in the eighties) and could never go back to him. GM Wang Kiu adopted me as it were his own “son”, student. He rewarded me with granting me this priviledge with the recognized written acknowledgement of a Hong Kong certificate. GM Wang Kiu was his Sigung, now he became his Shifu, but mostly his friend. He even granted me the recognition to be representatives of his legacy as a family (together with his wife and son they formed the Wang Kiu Yong Chun Pai) in Belgium although a successor was already appointed in the Netherlands. This was just an extra to protect, preserve and promote his legacy.