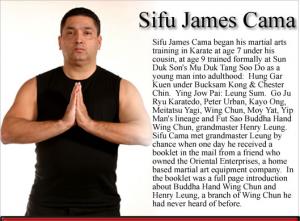 Sifu Cama became a closed door disciple under GM. Leung and eventually became the ﬁrst student to ﬁnish the whole system and be certiﬁed to teach the art of Fut Sao Wing Chun. Sifu Leung taught the system secretly for so long and because training was difﬁcult at times, many students never finished the whole system. In fear of the art becoming extinct and with GM. Leung's blessing, Sifu Cama has decided to open the gate and teach the art publicly. END_OF_DOCUMENT_TOKEN_TO_BE_REPLACED
primary teacher/lineage
Teacher Name
Rank Sifu Cama Obtained
Still Affiliated?
Five Elements Wing Tsun Kung Fu Association
3. Master of the System (As taught by teacher (Full Sifu))
No

Sifu Cama became a closed door disciple under GM. Leung and eventually became the ﬁrst student to ﬁnish the whole system and be certiﬁed to teach the art of Fut Sao Wing Chun. Sifu Leung taught the system secretly for so long and because training was difﬁcult at times, many students never finished the whole system. In fear of the art becoming extinct and with GM. Leung's blessing, Sifu Cama has decided to open the gate and teach the art publicly.

Immediately he became curious and phoned his friend asking him to introduce him to Henry Leung. His friend responded by saying that in no way, shape or form would he be able to meet master Leung because he was a closed door instructor, but that he might be able to train with one of his senior students. The friend gave Cama to address to the Friendship Restaurant located on Delaney Street in NYC. Cama rushed down to the location and entered the restaurant and quickly noticed it was occupied with some bad element for customers. At the counter was a Spry looking older Chinese gentleman who asked Cama what he needed. Cama asked for Peter who was Henry's student. He informed Cama that Peter would be there in a while.

After three hours of waiting, the Chinese man asked Cama what it was that he wanted. Cama explained that he was looking for Kung Fu instruction. The man placed an old Wing Chum book in front of Cama and asked if that was what he wanted. Excitedly Cama replied. "Yes, that's it!" The man told him to come back the next day at noon. Cama did as he was told and returned the next day at noon, hoping to meet Peter, but instead the Chinese gentleman was there again. This time he handed him a bucket and a mop and ordered him to do the ﬂoor and wait on the customers.

After several weeks of mopping the floor and waiting on tables, the day came when the Grandmaster Leung invited Catna down into the basement for his ﬁrst lesson. G.M. Leung asked Cama if he had any previous training in the martial arts. Cama made the mistake of telling his new sifu about his background G.M. Leung then instructed Cama to attack him with any thing or any way he wanted to. Being already accomplished in the martial arts, Cama ﬁgured he could easily score a few strikes on the small framed Leung and attempted to do so, but quickly found himself on the floor. Having not even seen what GM. Leung had done Cama knew for sure this was the man he needed to learn from.

Years passed by and Cama became a closed door disciple under GM. Leung and eventually became the ﬁrst student to ﬁnish the whole system and be certiﬁed to teach the art of Fut Sao Wing Chun. Sifu Leung taught the system secretly for so long and because training was difﬁcult at times, many students never finished the whole system. In fear of the art becoming extinct and with GM. Leung's blessing, Sifu Cama has decided to open the gate and teach the art publicly.

Fut Sao Wing Chun was brought to America in 1961 by Grandmaster Henry Leung, (Hong Lei, Chi Man) who trained and learned the whole system under the Great Master Gao Jhi Fut Sao the venerable Hsu Yuri, also known as "great penetration" and "nine finger Buddha hand," Hsu Yun was the Dharma - successor of all ﬁve Buddist Ch'an sects of China who lived to be one hundred and twenty years of age.

There have been several books written on the great master Hsu Yun two of which are pictorial biographies which were composed by one of his top disciples the Venerable Master Hsuan Hua. The books tell stories about the life and times of the great master as he traveled extensively throughout China teaching and helping whomever he could. Also within the stories are the tragedies and sufferings he endured as well as the victories and amazing esoteric powers that he acquired during his lifetime. One amazing story that took place in 1917 when the master was seventy eight years old tells how in the spring, eight workers were hired to transport a huge Buddha statue from Kuan Yin Pavilion to Chicken Foot Mountain in Junggwo, a journey that would take quite a few days though treacherous mountain terrain, to places where no people had previously gone.

One day while passing through Yen Jen (Wild Men) mountain, the workers ot the idea that there were gold and gems inside the Buddha, which in influenced all the other workers to not carry the large Buddha any further. They all began saying that they had no strength left to do so. They raised their fee and would not listen to reason, complaining that they were being taken advantage of. The master Hsu Yun noticed a boulder nearby that was several pounds heavier than the Buddha statue. The master pointed to the enormous boulder and said, "Is this rock not heavier than the Buddha?" The workers quickly agreed that it was in fact two times heavier than the Buddha. The master then gripped the boulder with his two hands and raised it high over his head. The workers were completely awed by this amazing feat of strength. They began to say this venerable master is a living Buddha and were more than happy to carry the Buddha through the mountain and were generously rewarded by the master upon reaching their destination. It was said : The Dharma protectors silently lent their aid.

LISTEN WITH YOUR ARMS AND ABSORB ALL THEIR TECHNIQUES

In a small village in Canton China the Leung family would have a boy born to the world two months remature. Henry (C i Man) Leung survived, but being born premature creat health problems for the young boy. The Leung family were devout Buddhist and were highly respected for their charitable deeds. Henry's father was a good friend of the venerable Hsu Yun (Gao Jhi Fut Sao) and brought the boy to him in order to strengthen his health and spirit. Gao J hi took a liking to the young boy and taught him the Young Virgin Hei Gung light skills. As he grew stronger Henry was taught Gu Yee Chuan (Ancient Chivalrous Fist) which was the forerunner to Fut Sau (Buddha Hand) Wing Chun Kuen. Henry was younger and smaller than the rest of the other disciples. They constantly would abuse young Henry during sticky hands (Chi Sao) by pinching is chest. One day he came crying to Gao Jhi who comforted him and told him, "Listen with your arms and absorb all their techniques." Before long, the victim became the "Victor." Within a years time young Henry had mastered all their hand techniques and made Gao Jhi proud.

Grandmaster Leung landed on the shores of New York City in 1961. Realizing he had in his possession a very rare and effective style of Wing Chun and not forgetting his sifu’s instructions not to teach the art of Fut Sao casually, he decided not to teach commercially and began to hand pick his students always teaching them behind closed doors.