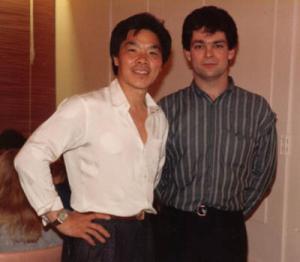 Sifu Ian Protheroe was born in England in 1954 and has been involved in the study of Martial Arts for most of his life. Since immigrating to Australia in 1960 he has become one of the country’s most END_OF_DOCUMENT_TOKEN_TO_BE_REPLACED
primary teacher/lineage
Teacher Name
Rank Sifu Protheroe Obtained
Still Affiliated?
Chu Shong Tin 徐尚田
No Formal Rank (Unknown Level of Mastery)
No


Sifu Ian Protheroe was born in England in 1954 and has been involved in the study of Martial Arts for most of his life. Since immigrating to Australia in 1960 he has become one of the country’s most respected instructors.

The son of a British policeman and military family, he started his martial training in archery and fencing at the age of ten, progressing to Western boxing in 1970 and then small arms training as age permitted. By 1977 he was being drawn to the Oriental Arts, exploring a number of Japanese and Chinese disciplines in the ensuing years.

In the early 1980’s he was introduced to Wing Chun Kung Fu; an opportunity to train under Master William Cheung changed his views towards combat. By 1986 his passion for Wing Chun grew to such an extent that he decided to devote his life to its study and perfection.

After gaining full instructor status from the World Wing Chun Association in Melbourne, Victoria, and teaching for Master Cheung’s organisation; he moved north to establish the Queensland Wing Chun Kung Fu Academy, now regarded as one of the most prestigious Wing Chun schools in the country.

To broaden his knowledge of the system he regularly travelled for another six years to Hong Kong seeking out the most knowledgeable Masters of Wing Chun. An internationally recognised instructor, Sifu Protheroe has, since 1991, been a permanent member of the Ving Tsun Athletic Association in Kowloon, the representative body for Wing Chun worldwide.

He is actively involved in the promotion of Wing Chun having held the following positions: State Chairman for the Federation of Australian Kung Fu Organisations, a position he held for six consecutive years; Kung Fu Advisor to the Australian Martial Arts Association, and State Coaching Director for the Australian Government National Coaching Accreditation Scheme (NCAS Hons).

In 2002 Sifu Protheroe was inducted into the “Blitz Hall Of Fame” as “Kung Fu Instructor of the Year.”

A respected author and teacher, he has featured in numerous Martial Arts publications and conducts seminar workshops for various groups throughout Australasia. He currently oversees his schools in Australia and New Zealand and instructs, on a private basis, students who wish to improve their lives through the study of Kung Fu.