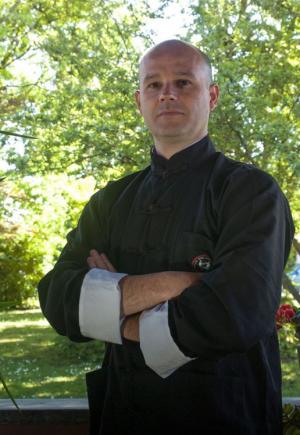 I still practice with Master Sam Lau (I visit him in Hong Kong at least a couple of times in a year). I had Baisi ceremony with Master Lau back in 2009, with 13 first generation disciples of Ip Man as witnesses. I am a lifetime member of Yip Man Martial Arts Athletic Association of Hong Kong (one of the associations created by Ip Man himself) and I hold a Official Instructor certificate released by the aforementioned

Sifu Furio Piccinini is a certified Sifu in traditional Wing Chun, following Master Sam Lau (last assistant of Ip Man) in Hong Kong. He started studying Wing Chun when he was 17 and had Baisi ceremony (tea ceremony) in Hong Kong in 2009, to become an official disciple in Ip Man's family. He is leading "Sam Lau Wing Chun Italy", the Italian branch of Master Lau school and is the official representative for Italy.

Born in 1976, I started practicing martial arts at 4 years old, in a Judo school in my town. At the age of 15 I moved to a Kick-boxing course in Pavia city, in the northern Italy. Two years later I moved to Thai boxing, practicing in Italy since the age of 20. During this time I came to know about Wing Chun Kung Fu, and I started learning this art with Italian masters. During this time I also went many times to Thailand to practice Thai boxing, in Bangkok city and Koh Samui island. At 22 years old I decided to focus only on Wing Chun Kung Fu, which I practiced intensively for 12 years, founding a well known Association in Italy and going to Germany to learn, in Wiesbaden and Heidelberg cities. In 2005, along with a friend, I met Master Sam Lau in Hong Kong and decided to learn the traditional Wing Chun Kung Fu, which is very different from the European interpretation. I travelled to Hong Kong 7 times per year in the average to learn intensively. In 2009 I attended the BaiSi ceremony (traditional tea ceremony) with Master Lau, becoming an official disciple of the Master. Since then, I set up the Italian branch of Sam Lau Wing Chun school, in direct contact with Master Sam Lau. At the moment the association is running more than 15 schools in Italy. I had the chance to follow Master Sam Lau to many different Countries (Hong Kong, mainland China, Germany, Italy) and help him to teach and promote Wing Chun. I have the honor of being in possession of a "Wing Chun Instructor Certificate" officially released by Yip Man Martial Arts Athletic Association, one of the associations founded by Ip Man. There are less than 40 certificates like this in the world and only 2 in Italy. I have very good relations with many different first generation disciples of Ip Man (Ma Hung Lum, Chan Wai Hong, Lee Wai Chi, Tong Cho Jee and many other). Today I still travel to Hong Kong at least a couple of times per year, to learn and help my Sifu to promote traditional Wing Chun. Notes - New Martial Hero Magazine Due to the great passion I have in Martial Arts, I write articles for the Italian branch of the Hong Kong based magazine New Martial Hero, talking about traditional Kung Fu, training methods and other related subjects. - Master Sam Lau in Italy As Sam Lau Wing Chun Italy, on 4-5 June 2016 I invited Master Sam Lau, his son Maxwell Lau and his wife in Italy, for a traditional Wing Chun seminar. The event hosted more than 150 people, coming from four different European Countries and had a very good media coverage.