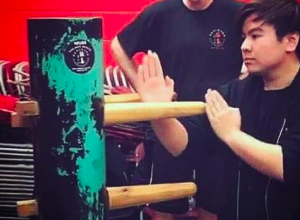 MEETING MY TEACHER 師傅, KEVIN GLEDHILL I was 16 when I first stepped into a Wing Chun school. My father and I were doing plenty of research at the time on the internet, in Chinese ad postings, END_OF_DOCUMENT_TOKEN_TO_BE_REPLACED
primary teacher/lineage
Teacher Name
Rank Sifu Kwong Obtained
Still Affiliated?
Kevin Gledhill
No Formal Rank (Unknown Level of Mastery)
Yes

MEETING MY TEACHER 師傅, KEVIN GLEDHILL I was 16 when I first stepped into a Wing Chun school. My father and I were doing plenty of research at the time on the internet, in Chinese ad postings, etc. to try and find a teacher that could teach me Wing Chun. Many were very far away, and quite a few charged a lot of money. We finally found one in New Jersey that I had plans to visit and start at, until a family friend in Chinese School (many Chinese children here attend a Chinese School on Saturdays) said that they found an incredible teacher just minutes away. Without naming names, there were quite a few who winced at the news that this teacher was White. Unfortunately, there are groups of very narrow-minded Chinese who firmly believe that Non-Chinese cannot teach a Chinese Martial Art in its entirety for some reason. Some have good reasons, most are just ignorant. It simply isn't true, movement and Wing Chun are not genetic. My father and I were open to the idea of learning from anyone, so we decided to make the trip after school. We pulled up to a small Taekwondo school in Matawan, New Jersey. The scene inside seemed like it came straight out of a movie; Two Chinese men stood in the corner, a giant Italian man with arms bigger than my head, a friendly looking man with gray hair, and a thin, bald guy in the middle of the room. Having no idea who the teacher of the school was, I could only stand and wait until he presented himself. By the time the bald guy walked over, I realized he was much taller up close. What happened next was nothing extraordinary. There was no challenge, no fighting, nothing epic. He just introduced himself as Kevin, the instructor. He much more soft spoken and polite that I imagined he would be, or any instructor to be from what I've seen in movies. He didn't really even sell us Wing Chun either. Being 8 inches taller than me, he bent forward just a little bit, held a fist up, and said, "This is how we throw a punch. Try it" He signaled for me to throw a punch at the arm that he held up. Our forearms clashed, and the only thought that went through my head was, "I think I just punched iron" Since then, Kevin has become my 師傅, traditionally, he is my teacher for the rest of my life.