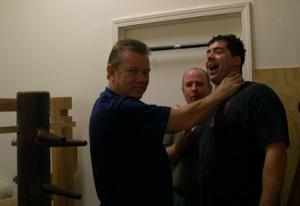 
Sifu Barber Bill Hernan or commonly known as Barber Bill, because he was a barber by profession.  Bill was born on July 18, 1947.  Around the early 70's after training in Karate, Bill met then Sifu Chris Chan, as Bill's barber shop was across the street from Chris'  Wing Chun studio on Market St., San Francisco, CA.

He trained with Chris, until he was introduced to Chris' older brother, Stanley Chan, through the Sifu Chan's nephew, Greg Yau.  Then he was taught the clssical Ip Man style of Wing Chun, as well as Sifu Stanley's version of Pien San Wing Chun.  This transformed Bill's Wing Chun from very good to great!

He taught Wing Chun in the back of his Concord barber shop called Le Cuts until this location was sold around 20005 and a new barber shop opened in Walnut Creek, CA.  The size of most of the classes were either about five students or privates.

Barber Bill,  was one of the few sifus in the US who was known to have a reputation for using Wing Chun in street fights and pehaps the only sifu who actually killed someone.  This unlucky thug had attacked Barber Bill in a bar fight using Wing Chun.