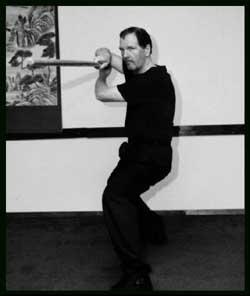 
Sifu Alan Lamb was born in Newcastle, England. He trained in traditional Karate for many years before beginning Wing Chun in the late 1960s. While in England, Sifu Lamb received his foundational training in Wing Chun under Joseph Cheng a disciple of Master Lee Sing.

After several years with Sifu Cheng, Sifu Lamb traveled to Hong Kong and trained with the renown Sifu, Ku Sang, one of Yip Man's most knowledgable disciples. Sifu Lamb graduated under Ku Sang becoming the first non oriental ever to master the system. Since then, Sifu Lamb has trained many teachers of traditional Wing Chun the world over.

Since the 1970's Sifu Lamb has been featured in martial arts magazines, cogently explaining and promoting Wing Chun.

In the 1980's Sifu Lamb broke new ground, offering one of the first systematic presentations of Wing Chun on video. In the 1990's he returned to that medium to produce detailed treatment of the Chum Kiu, counter grappling with Sifu Steve Cottrell. He has since been a leader again in martial arts instruction, producing the first detailed treatment on the use of the Wing Chun Pole.

Sifu Lamb presently resides in Burbank, CA where he teaches privately. He is available for seminars and welcomes inquiries concerning the art to which he has dedicated his life.