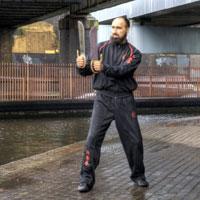 
Sifu Abid’s journey in martial art began in 1979 when he studied traditional Chinese martial arts. Under the guidance of his late Sifu, Sifu Abid studied a number of kung fu styles including Dragon, White Crane and Iron Wire styles. It was here that Sifu Abid got his first taste of Wing Chun. However he felt that there was no real structure or progress in his training and was eager to learn more. In 1981 Sifu Abid was introduced to Master James Sinclair and it at this meeting where he began his long and successful journey in Wing Chun.

Through Master Sinclair’s support and encouragement, Sifu Abid has been left with a lasting legacy of wing chun and the true a martial art spirit. Sifu Abid is still enjoying his passage through this wonderful and technical martial art and is supporting others in their journey also. Sifu Abid has dedicated more than most in his quest for knowledge and skill, and is now passing on this wisdom for the next generation Wing Chun pugilist.