Wing Chun Warrior: Duncan Leung's True Fighting Episodes Bruce Lee's fighting companion, Yip Man's private student and formal disciple, founder of Applied Wing Chun, instructor to the FBI, SWAT Teams and the US Navy Seals. Includes stories of Bruce Lee's defeat and Yip Man's triumph, by Ken Ing MD This is NOT a comic book. It is a nice hard-cover book which has some comic illustrations of some of the fights. These are the last of the hardback versions of this book available! Reviews: "This new book is wonderfully informal and instructive. Ken Ing helps to describe the art of Sifu Duncan Leung, who is a FIGHTING Wing Chun teacher. Leung was originally introduced to Yip Man by his boyhood friend Bruce Lee. Leung became Yip Man's personal disciple for some years and during that time engaged in hundreds of fights to test his prowess. There are many stories and personal revelations that should be fascinating, intriguing and occasionally infuriating to students of this style, and those interested in the clouds surrounding the Hong Kong days of Bruce Lee and others. Comic style drawings re-enact incidents and challenges from Leung's life. This is really an interesting text. It tries to give the spirit of the style as seen from Leung's standpoint and makes no bones about suggesting that much Wing Chun training is incomplete. However, unlike so much martial bragging, we get the impression from this spirited text that Leung wants the best for the style and the students. This is the story of someone who has, at least by all reports, tested the style. His no-nonsense approach shows, at least on some levels, the dedication and adaptability of the fighter." Ted Mancuso EWC Review: Personally I liked this book (it's one of my favorites). Many people don't like what they see of Duncan's style from his tapes, and I understand why - it's way different from the way they were taught. If you read the book, you'll understand why. For me, the book filled in a number of gaps about why Duncan is a bit different to the rest. He was a personal student of Yip Man, trained privately with him for 4 years and paid over 37 times more a month than everyone else, including Bruce Lee, Wong Shun Leung, Chu Shong Tin, Lok Yiu and the rest. So Yip Man taught him differently and taught him more. Duncan says in the book that Yip Man taught the others Wing Chun, while he taught Duncan how to apply and fight with Wing Chun - and the two are not the same. Duncan never trained with his classmates and had to go and pick fights to learn to use his Wing Chun. The fights in the book are very toned down from what I hear. Duncan's exploits far exceed anything in this book, but I'm sure he wishes to remain humble. He doesn't mention any names in the book, so he doesn't embarrass other Wing Chun Sifus. All in all it's worth the read and a great addition to your collection. 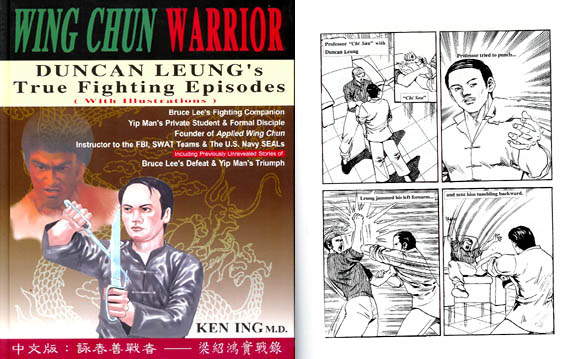