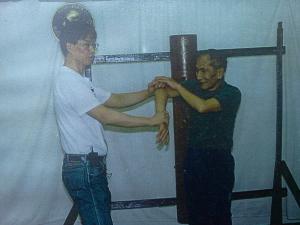 Sifu Yip Pui (Terence) has extensive backgrounds as a Wing Chun Kung Fu practitioner and as a teacher, of both intellectual and martial pursuits. He taught English as a second language in his native country of Hong Kong for eight years, and his martial arts experience exceeds thirty years.

In the late 1980's he immigrated from Hong Kong, following his dream of bringing authentic, traditional Wing Chun Kung Fu to the United States. He has been a valued since, attracting exceptional students and editorial attention.

Part of the reason for this is his heritage as a practitioner. He holds the honor of becoming a senior student of Grandmaster Yip Chun, eldest son of the late Grandmaster Yip Man and the premier Wing Chun Artist in the world today.

Sifu Terence Yip's priority is to teach Wing Chun in its purest form. The Yip Pui Martial Arts Center rejects the addition of fancy, flashy movements and questionable "secrets". A student that has gained skill with Sifu Yip would not be likely to win tournaments as techniques are not explored simply because they are pleasing to the eye. However in terms of real self-defense skills a Yip Pui Martial Arts Center student is formidable. Sifu Yip teaches Wing Chun the traditional way - the way it was taught to him which is the way Grandmaster Yip Man taught it without embellishment.

Understanding the contribution of soft and internal practices, a Tai-Chi Chuan program is also offered as well as Taoist Xuang-Gong (more commonly known as Chi-Gong). Sifu Yip is also well-versed in health and nutrition and regularly gives seminars on subjects such as reflexology and the advantages of wheat grass juice.