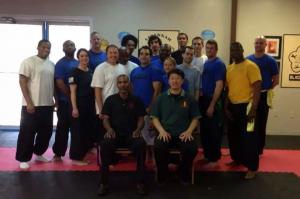 Savannah Ving Tsun is an authentic, credited kung fu school run by Sifu Michael Sampson. Having opened its doors back 2005, Savannah Ving Tsun has taken on many students from a variety of backgrounds, all of whom have transformed into a family community within the school itself. Having received multiple certifications, students of Savannah Ving Tsun Kung Fu school can be assured they’re learning the correct, intact style — not something that was altered according to the teacher. With certifications from the Ving Tsun Museum, the Lau Kne Do lineage, the Ip Man Wing Chun Lineage, and currently in the process of working toward Black Flag Wing Chun certification, students know that they are being taught by a credited school recognized by international Wing Chun kung fu organizations. The Savannah Ving Tsun school accepts young, old, experienced, or inexperienced. We pride ourselves on being a respectful family here. Everyone works with each other and, in turn, improves each other. So don’t be shy — it doesn’t matter whether or not you’ve been sitting in an arm chair for the better part of five years or are an active member of the military, Savannah Ving Tsun Kung Fu school is for everybody with a genuine interest in martial arts.