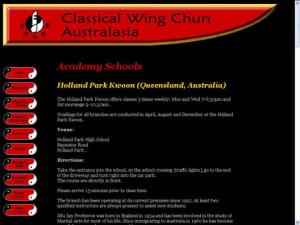 The branch has been operating at its current premises since 1991. At least two qualified instructors are always present to assist new students.

Sifu Ian Protheroe was born in England in 1954 and has been involved in the study of Martial Arts for most of his life. Since immigrating to Australia in 1960 he has become one of the country’s most respected instructors.

A respected author and teacher, he has featured in numerous Martial Arts publications and conducts seminar workshops for various groups throughout Australasia. He currently oversees his schools in Australia and New Zealand and instructs, on a private basis, students who wish to improve their lives through the study of Kung Fu.