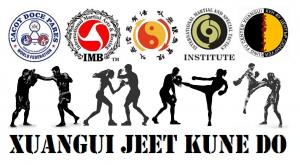 Club history Kung fu centre Xuangui was founded in the summer of 1995. The centre carries on the practice of traditional Chinese martial arts in Bulgaria, initiated by the esoteric society Tzin Lun, headed by Krasimir Dimitrov - the "Chinese", martial arts club Bagatur, Adrian Nedialkov's Jeet Kune Do group, Dobrin Vasilev's wing chun kuen group, EWTO, PAWTO, IMASTI and others. In the beginning of 1999 the centre founded the Balkan's first Brazilian capoeira group. Every year, the centre's instructors and members visit a large number of seminars and events organized by both Bulgarian and foreign masters in various martial arts styles and trends. The club is a centre for the exchange of experience, constructive and beneficial meetings, discussions, and collaboration between various styles, schools and practices. The club uses a new, contemporary method of teaching martial arts, conformed with the modern achievements of the education, science, the cultural, lingual, and informational development of the modern human being, his capabilities of perception and understanding, as well as the individual characteristics and requirements of every member. A result of the Xuangui's successful work and growing popularity are various public appearances and participation in forums, tournaments, demonstrations, festivals and others, a number of publications in the periodical press, participation in interviews and broadcasts in the electronic media, and the creation of periodically broadcasted films of both educational and popular nature. Two books have been published, monographs in the area martial arts and esoteric practice, and three more books of similar nature are currently being prepared for publishing. The centre currently has three groups practising the following martial arts: · Tai chi chuan (Fist of the Great Boundary), styles of the families of Yang, Chen, and Wu · Wing chun kuen (Fist of the Beautiful Spring) · Shaolin quan (Fist of the Monasery of Shao Lin) · Filipino kali, arnis, eskrima (Filipino martial arts) · Capoeira - Angola, Regional (a Brazilian martial art) An invariable part of Xuangui's educational practice is the use of various traditional weapons. In addition to these practises, the centre works in close collaboration with both Bulgarian and foreign schools of various styles of wushu (kung fu), karate, aikido, jujutsu, taekwondo, and others. Learning the various martial arts involves acquainting oneself with different cultures, their history, their traditional customs and beliefs, social and public relations, their religious and philosophical outlook on life. Xuangui is open to collaboration and contacts with all related organizations which have the goal of popularizing, developing and refining martial arts, their traditional practise, philosophy and culture. web: www.xuangui.com e-mail: xuangui@abv.bg youtube channel: https://www.youtube.com/user/bobystanchev