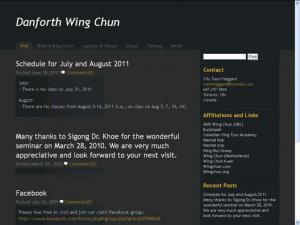 The Danforth Wing Chun Club was founded in the summer of 2000 when Sifu Trent Haggard moved from Vancouver to Toronto. Trent started Wing Chun training under Dr. G. K. Khoe at the University of British Columbia in 1990 (AMS Wing Chun Internal Kung Fu Club). Dr. Khoe was a private student of Sigong Wang Kiu in Holland, and studied Wing Chun while completing his doctorate in Chemical Engineering.

Wang Kiu was one of the first (and private) students to learn under Yip Man when he moved from Mainland China to Hong Kong. Being well educated, he used to write in the local weekly newspaper about the numerous challenge matches (vs. other styles) that he and his Wing Chun brothers got into. Their success in these matches helped to increase the popularity of Wing Chun.

Our club started off in the basement of the Eastminster United Church. We have since moved into a large, 5,000 sq. ft. Tae Kwon Do gym. Danforth Wing Chun has a mix of both beginner and senior students, making the classes suitable for all experience levels. We welcome all new students, whether you are a beginner or have prior experience in Wing Chun or other martial arts.